The NMMU Madibaz will not be underestimating their opponents when they face the University of Western Cape in Port Elizabeth on Monday night for another action-packed round of Varsity Football.

Head coach Graeme Harrison said he expected the match to be quite aggressive as UWC would be looking to close the gap after two successive losses, which see them lagging in seventh position on the log.

“They will be desperate for points, which is why we are ready for anything that they will throw at us. We respect them, but we will be going all out and fight hard to take the three points on offer.”

To achieve this, Harrison has brought back striker Cloudius Ray Sagandira, who was sidelined two weeks ago due to a concussion. His return will result in Alex Owusu moving to the bench for the time being.

“Sagandira is one of the team’s key players. He’s a lad with a big heart and an excellent work rate, so we’ll be relying on him to score the necessary goals.”

Kieran Koert, who netted the winning goal in the 80th minute of last week’s match, will also make an appearance at home to maximise the team’s chances of making the semi-finals for the second year in-a-row.

Harrison said that although the team’s morale was high and the boys were excited to notch up another win, there was still work to be done as the team had conceded goals in all their games so far.

He felt the defence needed to be tightened up and that UWC should not be given easy opportunities to score.

“We have been working hard to minimise mistakes and to up our concentration levels. It is imperative to concentrate the full 90 minutes and beyond,” said Harrison.

He called on Madibaz supporters to come out in numbers to support the students. “We enjoyed fantastic support last week; it definitely motivates the team.”

The match kicks off at 6pm at the NMMU Stadium. 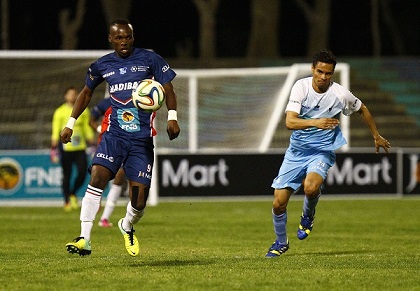