NMMU Madibaz central defender Lundi Balfour says Varsity Football offers players a taste of the big leagues and a chance to compete against their top contemporaries.

“The tournament is very important because it gives players an opportunity to improve their game and to play against other talented young students in South Africa,” said Balfour.

Originally from Dutywa, a small rural town between East London and Mthatha, he is proud to have spent the greater part of his youth in Port Elizabeth.

The third-year management student is known affectionately as Mutshiri by his teammates.

“As a young boy all the older guys started calling me Mutshiri after former Orlando Pirates midfielder Steve Lekoelea, as I was playing midfielder at the time.”

Now all grown up, Balfour says Varsity Football echoes the professional environment, with the corresponding attention, special treatment, cameras and fans in the stadium demanding results.

“The nerves don’t last because we are so focused on the football. We forget about these added pressures that make playing in these conditions fun and exciting.”

The former Victoria Park High School learner has represented NMMU at club level since he was in grade 11.

Balfour worked his way up into the Madibaz first team and is currently playing in his second Varsity Football tournament.

He describes it as the toughest and highest level at which he has played.

“The pace of the game is very quick and demanding, and the teams we play against are organised and know exactly what they want to achieve.”

Because of the intensity of the competition, Balfour relies on his innate ability to read the game.

“I can pass the ball very accurately whether it’s on the ground or in the air, I make solid tackles and can organise the players around me.” 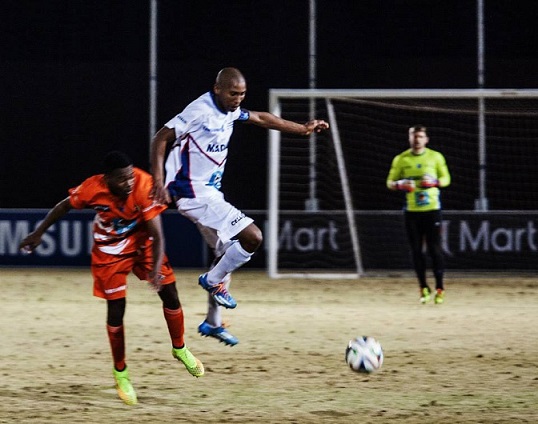