The inaugural SPAR Family Challenge will be spreading the love to little ones when thousands of runners are expected to take to the streets in aid of charity in East London on August 23.

The event, which offers 5km and 10km options, has chosen the Loaves and Fishes Network (LaFN) as its beneficiary due to their stellar work with children in need.

Focusing on Early Childhood Development (ECD), they work with children aged six and younger who are affected by poverty, violence and HIV/Aids.

Based in East London, the LaFN run an upliftment programme for ECD centres (crèches) in Mdantsane and the metro’s rural outlying areas, where 70% of workers earn less than R1 500 per month.

LaFN chairperson Brendan Connellan said they were delighted to be aligned with the event.

“We feel privileged to have been chosen as there are so many good NGOs out there that need support. To be associated with such a well-known brand is humbling.”

“They are a wonderful organisation with a dedicated team of people. Although they have fundraising activities, the need is so great that additional assistance is necessary.”

The LaFN’s holistic programme was named the best in the country at the SOMAFCO (Solomon Mahlangu Freedom College) Beacon of Excellence awards in 2011.

The first tier of the three-year course focuses on training carers in best practice childcare and the principles of ECD.

They are equipped with skills to offer youngsters the best chance at developing into well-balanced, healthy and economically productive adults.

The second tier involves improving infrastructure, like assisting crèches with new buildings, classrooms, water tanks, toilets and so on.

“We focus on crèches that are positioned on community owned land to ensure that the facilities are there for years to come and used for the benefit of that community,” said Connellan.

The third and final tier is their Orphans and Vulnerable Children’s Programme which, among other things, runs a feeding scheme for more than a thousand children.

“We help ECD centres apply for the R15 per child per day grant offered by the Department of Social Development, part of which is meant to be used to feed children,” explained Connellan.

“Sometimes grants are only given for a portion of the children so it is important that we ensure that the balance of the kids is fed.”

Vegetable gardens are cultivated at most crèches to create a sustainable source of food, but there is still a dire need for cash.

Connellan said funds raised through the SPAR Family Challenge would go towards operational costs and food.

Enter at www.sparfamilychallenge.co.za or get an entry form at SPAR outlets, schools, running clubs and cycle shops in East London.

Enter before August 15 to stand a chance to win a weekend getaway for six people at the Areena Riverside Resort in East London.

For breaking news, go to SPAR EC in Action on Facebook or @SPAR_EC. 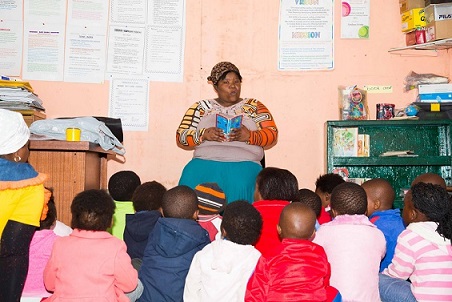 Bulelwa Sidoda reads a story to children at the Monde Day Care Centre. The centre is one of the facilities that receive assistance from the Loaves and Fishes Network. Photo: Michelle Guzinski