Top Port Elizabeth real estate broker Kobie Potgieter was among the national winners at the southern African leg of the Africa’s Most Influential Women in Business and Government awards in Johannesburg on Wednesday.

The pan-African competition attracted more than 9 000 nominations from 43 countries.

Potgieter, owner of Re/Max Independent, was named Country Winner after beating out eight other finalists in the small and medium enterprise (SME) sector.

Potgieter’s award follows the announcement last week that she was also among Re/Max’s 10 top-selling agents worldwide based on residential sales commission out of 90 000 agents in 93 countries.

The property dynamo runs the international franchise’s biggest operation in the Eastern Cape with three offices in Lorraine, Walmer and Brymore.

She said her recent achievements helped to further her ambition of making a significant contribution to her community.

“For me it’s about being a role model and inspiring young girls and women to believe in themselves.

“If you want to be successful in business you must be willing to make certain sacrifices to achieve your goals,” said Potgieter.

“Dedication, hard work and surrounding yourself with likeminded, competent people are the driving forces behind my success.”

She said the award provided the ideal platform to promote the development of businesswomen in Nelson Mandela Bay.

“If I can assist and mentor them, we can grow our local economy and create a thriving business environment in which women play a more influential role.”

According to organising company CEO Communications, Potgieter was chosen for the meaningful contribution she had made to her industry as well as the positive socio-economic impact that it had had on the country.

As a founding member and vice-chairman of Real Estate Business Owners of South Africa, Potgieter has been instrumental in providing a platform for smaller role-players to make their voices heard in the sector.

The former teacher’s social responsibility initiatives, which focus mainly on education and training, include the establishment of a tertiary scholarship fund for residents of the MTR Smit Children’s Home. 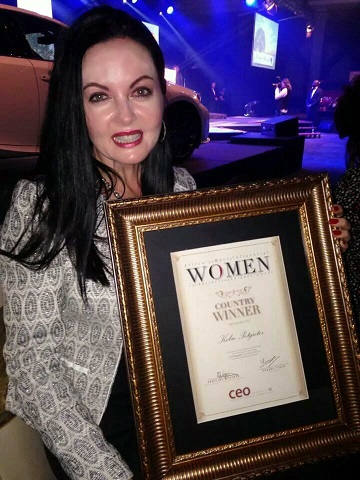 Top Port Elizabeth real estate broker Kobie Potgieter was named Country Winner in the SME sector at the southern African leg of the Africa’s Most Influential Women in Business and Government awards in Johannesburg on Wednesday. Photo: Supplied