Port Elizabeth cyclist Monique Gerber will take on the world’s best at the UCI Junior Track World Championships in Gwang Myeong, Korea, from August 8 to 12.

Gerber, who races locally for the Bestmed-Shukuma Madibaz club, said she was excited at being given the opportunity to race against the best junior women in the world.

It will be the 18-year-old’s first outing at the event after illness and lack of early season form put paid to her selection last year.

She returned to her best this season to win all her events at the national track championships in April, after finishing runner-up at the 110km Tour Durban the day before the competition started.

The African junior road race champion said her track selection had come as quite a surprise as her focus had been on preparing for the road equivalent, which takes places in Spain in September.

“I’ve had a very good season on the road and finished on the podium in a number of national classics against the elite ladies,” said Gerber, who also rides in the colours of pro team Bestmed-ASG.

Although the road team has yet to be announced, she said as reigning continental champion she was hopeful of her inclusion.

“I’ve been spending most of my time training in the mountains, so I only started doing speed work on the track a week or two ago.

“It’s been tough getting used to the high speed again but I’m feeling more comfortable every day.”

Gerber said she would use her road training to her advantage by concentrating on the longer track events. She will participate in the 7.5km scratch race, 2km individual pursuit and the 20km points race.

“The pursuit has become a very specialised event. I set world-class times as an under-14 and under-16 rider but I haven’t focused on it this year, so my best chance of a medal will be in the points race, where I believe my road endurance will help a lot.”

While she does have the SA pursuit record in her sights, she said it was difficult to gauge her current levels of performance against those of her international peers.

“I broke it while competing in Australia. The wood surfaces there are so much faster than the concrete in South Africa, so it’s very difficult to measure your performance based on times set here at home.”

Gerber comes from a cycling-mad family, who relocated briefly Down Under to allow her to gain international racing experience.

“There I trained with 2008 Olympic road race champion Nicole Cook and many other track world champions. I won many criterium races and on the track I won two silver medals at the Western Australia state championships.”

She and sister Anja, who also races professionally, are now both home-schooled to allow them the flexibility to balance their academic and riding schedules.

Their mother is in charge of their education, while father Frans, who has a degree in sport science, does duty as coach. “So our school books often travel along when we go away to races.”

Gerber plans to study education at NMMU from next year.

Her Madibaz teammate Francois Geldenhuys will also do the university proud when he competes in the UCI World Cycling Tour Finals, which start in Slovenia at the end of August.

Geldenhuys qualified for a spot at the prestigious event when he won both the time trial and road race in the 30-34 age category at last year’s Msunduzi Road Challenge. 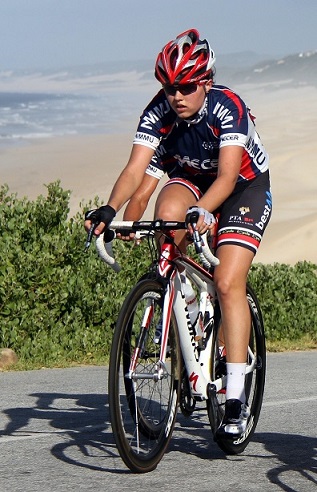