The NMMU Madibaz proved their Varsity Football campaign was far from over when they overcame the University of Cape Town to a take a 2-1 maiden win on Monday night.

Madibaz head coach Graeme Harrison said he was delighted with his players’ performance in front of an almost 2 000-strong home crowd.

“The boys fought hard, they stuck to the task at hand and stood up to the challenge. I’m very proud of them.

“We knew it would just be a matter of time before it happened,” said Harrison.

“They showed how determined they were to get the result and reverse the loss against UJ last week.”

He said his team had opted for a radically different approach for the game against their Western Cape-based opposition.

“We decided as a group that we need to be more attack minded, to go forward and create as many scoring opportunities as possible and convert those opportunities into goals.”

While the strategy had left them slightly vulnerable in defence, Harrison said it had paid off in the end.

“That was a risk we were prepared to take because that’s how determined we were to win.”

He said the Madibaz dominated throughout the first half to take a one-goal advantage into halftime.

“In the second half we obviously knew that UCT would throw caution to the wind and come at us. Fortunately, we got our second goal in the 80th minute, which we thought had knocked the wind out of their sails.”

Their rivals were determined to go down fighting however and scored in the optional extra time.

Harrison said playing for the full 90 minutes and beyond was one area that his relatively inexperienced side would continue to work on.

“In our first game against North West University we also conceded a late goal, so I think we’ll learn from this. We need to concentrate for the full 95-plus minutes that the referee allows.”

One standout young player was wide attacker Sachin Jackson, who went on the run to put the first points on the board for Madibaz and scoop the FNB Man of the Match award for his efforts.

“He grabbed his chance with both hands, gave a very good account of himself and was rewarded accordingly.

“It certainly vindicates my decision to bring him into the team.”

With one loss, one draw and one win to their name, Harrison said his fifth-placed side were certainly still in contention for the overall title.

“We’re within striking distance now; there are still lots of games and lots of points on offer. Things are going to get very interesting going forward.”

He pointed to defending champions Tuks’s 4-0 drubbing at the hands of newcomers UJ as an example of the exciting upsets that the tournament had produced.

“In this tournament anybody can beat anybody, so on the day you’ve got to take the chances and make the most of it. There are a lot of surprises still in store for us in this competition.”

The Madibaz will face the University of the Western Cape at the Madibaz Stadium in Port Elizabeth next Monday night. The game kicks off at 6pm. 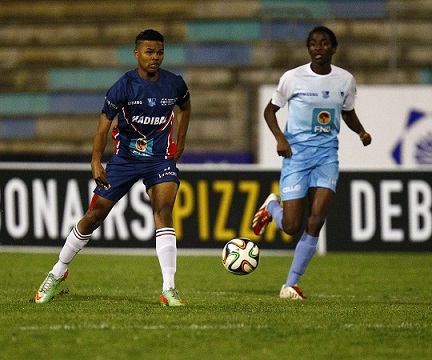 FNB Man of the Match Sachin Jackson of NMMU Madibaz passes the ball during their Varsity Football clash with the University of Cape Town on Monday night. Photo: Michael Sheehan/Saspa