Families across Buffalo City are preparing to pound the pavements ahead of the first ever SPAR Family Challenge, which sets off from Beaconhurst School in Beacon Bay on Saturday, August 23.

More than 3 000 runners and walkers are expected to turn out for the inaugural edition of the event, which comprises a 5km fun run and 10km road race.

“We have been looking to expand our sponsorship footprint in the Eastern Cape region and specifically East London, so this event presented the ideal opportunity.”

Swart said the success of the SPAR Women’s Challenge in Port Elizabeth, which celebrated its 21st anniversary this year, had prompted them to bring something similar to East London.

“We hope to grow this into another iconic event on the regional sporting calendar.”

He said the race was perfectly suited to the city’s sporting and family-oriented lifestyle.

“For us, it’s really about bringing people together and creating opportunities for families to spend quality time together, while enjoying a healthy, active lifestyle.”

In addition, Swart said, participants would be doing good for their community while getting some exercise.

“Our race beneficiary is the Loaves and Fishes Network, which looks after children affected by poverty, violence and HIV.”

He said there would be official race T-shirts and goodie bags for the first 2 500 entrants, with medals going to all finishers.

“Participants will also be able to download a finisher’s certificate, as well as photos and videos from the day via the race website.”

The 28-year-old, who boasts a top-30 finish in the Comrades Marathon, thanked the sponsors and organisers for their commitment in bringing the new race to the East London community.

“I’d also like to encourage as many families as possible to come down and either run or walk in this amazing event.”

Enter on www.sparfamilychallenge.co.za before August 15 and stand a chance to win a weekend getaway for six people at the Areena Riverside Resort in East London.

Entry forms are also available at SPAR, SUPERSPAR and KWIKSPAR stores in East London, as well as cycle shops, running clubs and schools.

For breaking news, go to SPAR EC in Action and SPAR Family Challenge on Facebook or @SPAR_EC and @sparfamilyrun. 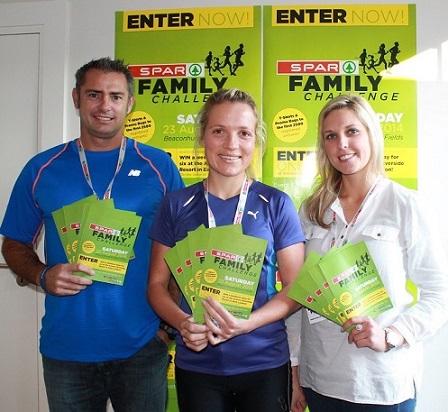