A spirited Bestmed-Shukuma Madibaz cycling team had their rival universities in a spin as they took a convincing win in the team classification at the national student championships at the University of Pretoria on Friday.

With the stage times of the top three finishers from each institution added together, the team from Port Elizabeth showed incredible consistency to podium in all five stages.

“We went into the tour with the sole objective to win or, as the team said during preparation, ‘bring back the flowers to PE’. We did just that.

“It is a team event and our aim was to prove ourselves as the best cycling university out there.”

Nel said Prinsloo, who was third overall last year, had been their strongest contender and that Gronum had also impressed and improved with every stage.

The yellow jersey however went to the host institution’s Kevin Patten, who rides professionally for Westvaal-BMC.

“Kevin is an outstanding sportsman with great sportsmanship and deserved the yellow jersey,” said Nel.
“He had a strong team to support him through the longer stages. He also delivered superb rides to win the time-trial, hill climb and criterium.”

Although Tuks had pre-existing route knowledge, a number of pro riders and the largest team in the tour, they could not capitalise on their competitive advantage.

On the opening day, the Madibaz went out all guns blazing in the first stage over 76km. Nel and Sean Bos put in big efforts to chase down numerous attacks, however, a well-timed break by Tuks’s Thomas Weeks saw the hosts get away to steal the stage.

In the afternoon’s 20km time-trial, the PE team fought back to occupy the lower steps of the podium behind Patten.

“Henno had the ride of his life, coping with and overcoming cramping legs to finish second. Marinus and Waldo were also magnificent.”

The Madibaz edged into the overall lead on day two after Nel overcame a puncture to win the 135km stage.

“I punctured 80km in and faced extreme conditions with traffic and trucks to get back into the peloton. Our strategy was to up the pressure after the last king of the mountains (after 107km),” said Nel.

“Just before this, I got everyone together and we did one of our team songs. You could feel the tension rising in the peloton. I think everybody was shocked by our spirit and cohesiveness.

“I saw that Tuks suffered when we turned up the pace and knew we could take the lead here.”

Despite Prinsloo losing the 2.4km hill climb – and the polka dot jersey – to Patten by just two seconds on the final day, the team were able to further extend their lead over Tuks.

In the final stage, a 45-minute criterium, Gronum got into an early break with Patten that sealed the first two places.

“Waldo took second and Marinus third and we immediately knew that we’d won the tour and the atmosphere was indescribable. We did our team cry at the finish line.”

Nel said their success would not have been possible without the support of their team management, sponsors and parents. 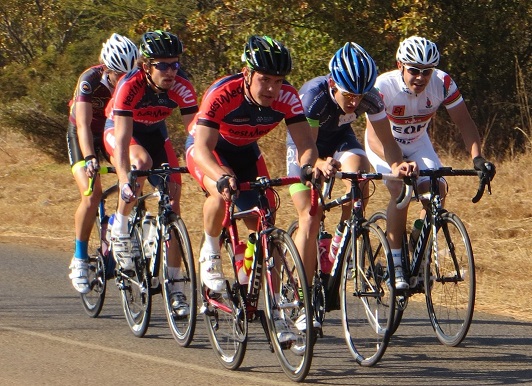