The team from NMMU dropped just one of their three pool games – against favourites UKZN – en route to the final, where they went down 1-3 to defending champions the University of Johannesburg.

UJ were unbeaten throughout the five-day Ussa tournament and fielded an experienced team of seasoned campaigners that included Protea players Brendon and Clinton Panther and Taylor Dart.

According to Madibaz hockey coach Cheslyn Gie, his men had been determined to reach the playoff rounds after narrowly losing to UJ in the 2012 final and finishing seventh overall last year.

“After the Varsity Hockey competition in May, we knew we had the ability to make a semi-final and that was our objective. So we achieved our goal and making the final was a bonus.”

The Port Elizabeth-based side romped to a 4-0 win over Maties in their opening match before going on to trounce Wits 4-1. Having already qualified on points for the semis, their 1-4 loss to UKZN was merely an unfortunate blot on their record.

“In the semi-final, we put Kovsies under pressure with our press and scored early on. After relaxing our grip and allowing them back into the match, we played a more controlled second half to run out 2-0 winners.”

In the final clash, Gie said the Madibaz had started out strongly and pressed UJ into some unforced errors to take a 1-0 lead.

“Unfortunately we made two bad defensive errors that led to bad tackles and UJ was awarded penalty strokes, scoring from both. This put us on the back foot and we had to chase the game.”

Disaster struck when centre back Devon Clarke retired injured after running down the flick during a penalty corner and fracturing his right thumb in four places. His ability to make tackles and set the tempo for the Madibaz’s attacking play was sorely missed.

“In the second half we took a few more chances by pushing players through but then UJ scored on a counter attack, which took the game away from us,” said Gie.

With five new first-years in the line-up, he said the future looked promising for his relatively inexperienced team.

“We have very fast forwards, so we play a counter attack type of game and at times we push high. With our speed and skill we can create lots of scoring opportunities.”

“Our sweeper Jason Altwig was one of the best defenders and distributors in the team. He had an excellent week and his leadership as captain really shone through.”

“In his final year as a student, he excelled by pulling off some great saves throughout the week.”

The Mecer Madibaz women finished sixth overall to secure their place alongside their brother team at the 2015 Varsity Hockey competition. 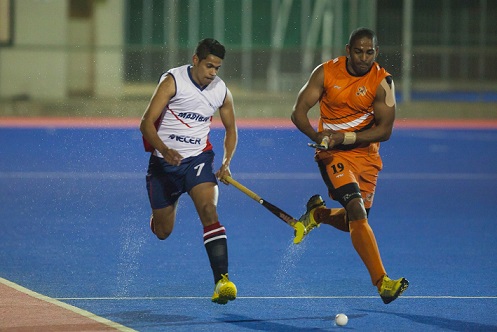