The NMMU Madibaz have brought in reinforcements for their Varsity Football battle with the University of Cape Town, which takes place on home turf in Port Elizabeth on Monday night.

Leading the troops will be captain Kurt Duff, who makes a welcome return to the centre midfield position after being forced to withdraw from last week’s game.

Madibaz head coach Graeme Harrison said he had brought in a number of players who would strengthen the PE-based side’s attack after their 3-0 defeat at the hands of UJ last week.

“We want to be more attack minded. We want to go forward and create chances and then convert those chances into goals.”

Harrison said he expected UCT to be physically tough and dangerous opponents.

“There are no easy games in Varsity Football. They also come from a loss last week, so they too would want to set the record straight.”

He said his management team had been working hard on the balance between defence and attack.

“Ultimately, to win games, we need to score more goals.”

Striker Cloudius Sagandira tops the casualty list after suffering a concussion in the last game.

“Reginald Mabokane has been brought in to replace the injured Sagandira and will add more firepower to our line-up,” said Harrison.

Also out is Cornelius Matuoane, who sustained a knee injury. In addition, the coach has made three further tactical changes.

“Lukhanyo Stemele and Vuyolwethu Marele have come up to bolster our defence on the left and right and also add to our attacking options,” he said.

“Wide attacker Sachin Jackson is another exciting young player who has been brought in to give us more variations and increase our goal scoring abilities.”

Harrison said his team had been working hard to reverse last week’s result.

“They are determined to bounce back and everyone is in a confident mood. While we won’t underestimate UCT, we will be going all out to take the three points on offer and give our home supporters something to cheer about.”

He called on Madibaz supporters to come out in numbers and spur the home team on.

“We’ve seen around the country how the other Varsity Football teams have massive support and we need our fans to do the same.”

The match kicks off at 6pm at the NMMU Madibaz Stadium. 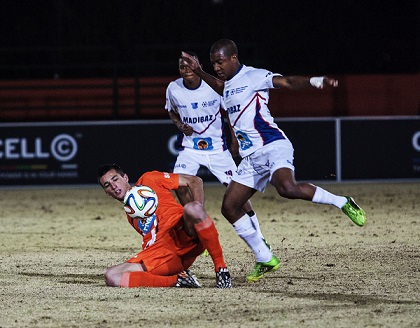 The NMMU Madibaz have brought in reinforcements for their Varsity Football battle with the University of Cape Town, which takes place on home turf in Port Elizabeth on Monday night. Photo: Nicolene Olckers/Saspa