South Africa A will field not one but two NMMU stars when they face Australia A in the first of two four-day cricket tests Down Under next week.

Mecer Madibaz and Chevrolet Warriors opening batsman David White will make his debut for the national squad alongside teammate Simon Harmer, who has become a regular fixture in the line-up.

“Representing your country in any form is a massive honour and to play Australia in Australia is about as good as it gets,” said White, who was also formerly part of the SA Schools XI and the national U19 team for the World Cup in New Zealand in 2010.

“I’m just going to soak up the experience and hopefully come back a stronger player for it. It’s a very good chance to measure myself as a batsman.”

The right-hander has been hard at work preparing for the fast pace of the Queensland pitches.

“I’ve been doing a lot of my preparations indoors and inland to try and mimic the Australian conditions as closely as possible.

“I believe they’ll suit me as all four of my first-class hundreds this season were scored up-country on the faster wickets.”

White, who made his first-class debut for Eastern Province against Boland in 2010, will take up his familiar position at the top of the order.

“It’s a tough and specialised position but I really enjoy it,” said the 23-year-old.

White caught the selectors’ attention this season with consistently impressive performances, including three centuries and five half-centuries in the Sunfoil Series.

“I enjoyed a good season with the bat,” he said.

“My tally of 882 runs in 10 matches was a record for the most runs in a season by a Warriors batsman, which I’m very proud of.”

His results are a far cry from the disappointment of fracturing his hand in his first outing for the provincial outfit back in early 2012.

“I had to wait 18 months before I was selected again due to lack of form and a hip injury that later required surgery. I only started playing as a full-time member of the four-day team in October last year.”

Since then White has been the mainstay of the Warriors innings but describes his bowling as a “work in progress”.

“I bowled quite a bit this season but with limited success. I definitely think I have the ability to become a genuine all-rounder in the future.”

Although a born and bred Durban boy, he has called Port Elizabeth home since his family relocated to the city when he was 16.

White completed his schooling at Grey High School and was also part of the EP Cricket Academy, which is run in conjunction with NMMU, in 2010 and 2011.

Now in his third year of human movement science studies, he said balancing his academic and cricket commitments had been a hard slog.

“Due to my cricket commitments I have never been able to study full-time and I’ve spread out my degree over a longer period but I can see the finish line now!”

When asked about his future aspirations, White said he still had his sights set on a test team berth but was realistic about his path to Protea glory.

“Obviously that is the goal but I’m not getting too far ahead of myself. I still feel I have work to do on my game before I’m ready to succeed at test level.”

The first test starts at the Tony Ireland Stadium in Townsville on August 7, followed by the second test at the same venue a week later. 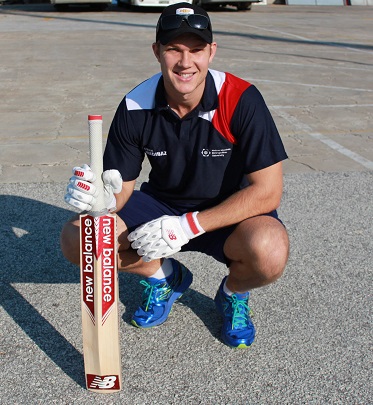 Mecer Madibaz batsman David White will join club and Chevrolet Warriors teammate Simon Harmer in the SA A side that will take on Australia A in two four-day test matches Down Under in August. Photo: Full Stop Communications