It was a fitting birthday celebration for Nico Pfitzenmaier as he and Renay Groustra were all but gifted the stage win on day two of the RECM Knysna 200 on Saturday.

The RSA Web-Dorma pair powered up and down the climbs on the 68km stage from Quinta da Monthana, just off the Rheenendal road, to claim their second consecutive stage at Thesen Harbour Town in 2:48:23.

Second on the day, in 2:55:32, were Cannondale-Blend veterans Martin Epstein and Andrew Davies.

After going off course on day one, Lionel Murray and Lucas McDowall of Freewheel Cycology clawed their way back into contention after placing third in 3:06:57. Their total time of 6:59:50 sees them moving up to the same slot in the general classification.

Pfitzenmaier and Groustra were in a class of their own on the wet opening day and confirmed their superiority in near-perfect conditions on Saturday.

Their total time of 6:03:47 puts them more than 30 minutes clear of Epstein and Davies and only mechanical issues can now stop the duo from registering a deserved race victory.

Pfitzenmaier, who turned 43, said the stage win had been a great birthday gift.

“It’s such a treat. I thought about organising a birthday ride yesterday and I’m quite surprised by the turnout,” he laughed.

The world masters cross country champion said the racing had been hard right from the outset as the field gunned for the day’s only king of the mountains hotspot, which came in the Krisjan se Nek section of the Garden Route National Park after a mere 4km.

“The uphill start tested our legs from the beginning,” said the German, who fell slightly off the pace as Groustra surged ahead to take the prize ahead of Hammer Nutrition’s solo category leader Dominic Calitz.

“Now I can afford to buy Nico a present,” quipped Groustra.

Pfitzenmaier made it a birthday to remember when he recorded the fastest time on the technical enduro section that culminated just before the first waterpoint.

“Watching Nico and Dominic duel it out down there was a lot of fun,” said Groustra.

“I was worried someone was going to come short because there were just sticks and stones flying everywhere.”

But the leading team and their solo companion stayed intact and continued working together to extend their lead.

By waterpoint two, which came after about 40km of intense racing, they had a four-minute gap on Rocky Mountain’s second-placed solo rider Jarryd Haley, with Epstein and Davies a further 30 seconds adrift.

The leading trio stretched their advantage to more than six minutes by the time they exited the Goudveld Forest and headed for the Knysna Waterfront via the Seven Passes road.

Calitz, fifth at the continental championships this year, led the charge into the finish to cross the line a split second clear of Groustra and Pfitzenmaier.

Women’s category leaders Lindsey Chicken and Judy Scheepers of Bikeplus also continued their winning form, finishing the stage in 3:38:54 for a total time of 7:57:37.

“She’s a goat on the hills, she just goes,” said Scheepers, who sang the praises of her teammate afterwards as they went more than half an hour clear of their rivals.

Multiple Argus and national road champion Anriette Schoeman, of Africa Silks-Bestmed, conquered the queen of the mountains hotspot en route to another uncontested stage win in the solo race.

Merrell’s Andrea von Holdt and Graeme van der Nest completed a brace of stage wins in 3:38:00. Their overall time of 7:40:14 also puts them more than 30 minutes ahead of their closest challengers.

The three-day, 200km stage race culminates in Knysna on Sunday. 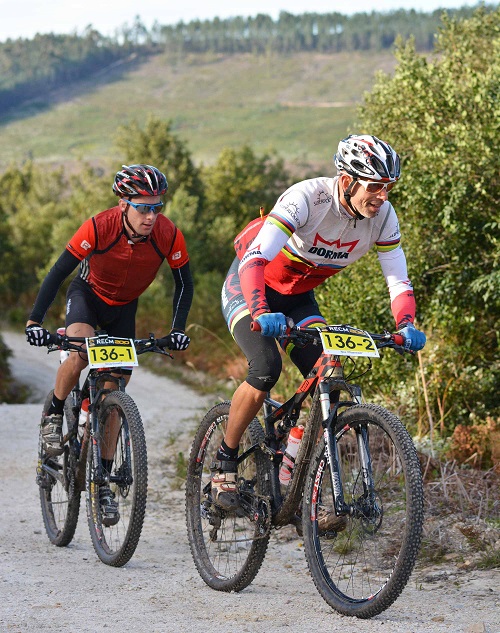