World cross-country masters champion Nico Pfitzenmaier and teammate Renay Groustra outclassed the competition to take a mud-splattered victory on the opening stage of the RECM Knysna 200 in the Garden Route town on Friday.

The RSA Web-Dorma riders turned up the heat in icy conditions to claim the 74km stage from the Knysna Elephant Park to Thesen Island Harbour Town in 3:15:24.

Martin Epstein and Andrew Davies, riding in the colours of Cannondale-Blend, finished strongly for the runner-up spot. Andrew Donnell and Marsel Roos, of On Your Bike-Knysna, was a distant third.

Groustra said a small lead group had separated quickly from the rest of the field after the neutral zone through the park.

“We were on our own from pretty early on. It was very muddy out there and we had to do a lot of pedalling to keep moving forward.”

By the first waterpoint after 25km, Groustra and his German partner had put seven minutes into chasers Epstein and Davies, with only solo riders Dominic Calitz and Knysna’s own Vernon Moos able to keep pace.

With Moos dropping off by the halfway mark, it was left to the top three to set their own tempo on the single-track through the Fisantehoek forest and Wittedrif settlement en route to the finish.

Groustra and Pfitzenmaier raced onto the causeway to take the win, while Calitz chased them to the line for solo category honours in 3:15:25.

According to Pfitzenmaier, who finished third alongside Timo Cooper last year, the new single-track sections were “a bonus”.

“Next week I’m heading to Canada for the BC Bike Race and I believe it’s exactly like this, slippery and rooty, so it’s very good conditioning for me.”

In the women’s race, the Bikeplus pairing of Lindsey Chicken and Judy Scheepers took an incident-free win in the sticky conditions in 4:18:43.

“It was hard but absolutely stunning. We love this race,” said Chicken.

Mixed category winners Andrea von Holdt and Graeme van der Nest had a scare when they suffered a broken chain after 50km.

“We dipped into a mud puddle, cranked out and then it split,” said Von Holdt.

After stopping to make a quick repair, the Merell duo raced back to place the seal on the day’s victory in 4:02:14.

On Saturday, the 67km second stage rolls out from Rheenendal. 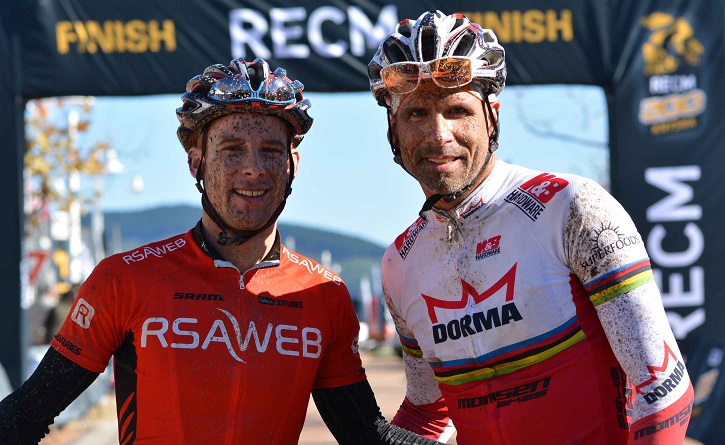