Nico Pfitzenmaier and Renay Groustra powered to a third consecutive stage win to claim an emphatic victory in the RECM Knysna 200 on the Garden Route on Sunday.

The duo showed their technical superiority when they took the lead in extremely muddy conditions on day one and did not relinquish it again.

They set a blistering pace on the final 58km stage through the Harkerville Forest to put the seal on a dominant performance in the three-day, 200km race.

The RSA Web-Dorma teammates cruised into the finish at Thesen Harbour Town in 2:09:20 to take the overall win in 8:13:07.

Cannondale-Blend veterans Martin Epstein and Andrew Davies limped home seventh in 2:29:10 after damaging a rim in the closing kilometres. They had however done enough to retain the overall runner-up spot in 9:04:41.

Freewheel Cycology’s Lucas McDowall and Lionel Murray, who went astray on the opening stage, finished second on the final day in 2:24:58 to remain third overall in 9:24:48.

Groustra said he was very happy with the win, which had set him up well for the world marathon championships in Pietermaritzburg later this month.

“It was a solid three days of riding and I think it’s going to round off our form quite nicely. I’m just excited to be on the up and see what I can do after this.”

World masters cross-country champion Pfitzenmaier, who leaves shortly for the BC Bike Race in Canada, said the race had provided excellent conditioning for the tough international event.

“The form is coming along and we had a nice strong day to finish, which is good for your head. The slippery roots and conditions are what I’m expecting in Canada, so it was good preparation.”

Hammer Nutrition’s Dominic Calitz, who had kept pace with the leaders throughout the race, chased hard once again to claim the stage (2:09:48) and overall (8:13:36) laurels in the men’s solo category.

Local rider Vernon Moos, who is a product of the Knysna Sport School, showed his grit after crashing on the technical timed enduro section and puncturing irreparably.

Calitz said he was very happy that the race was over.

“Renay and Nico are really on form and I struggled to keep up with them. I came into the race in semi-form and really had to ride my lungs out.”

The Merrell duo of Andrea von Holdt and Graeme van der Nest kept their stranglehold on the mixed category, taking their third stage win in 2:38:47 to earn the overall title in 10:19:01.

They were followed home by the husband-and-wife pairing of Annari and Philip Jordaan in 2:52:25, who placed second overall in 11:02:25.

RECM’s Marilyn Fischer and Piet Viljoen were third on the stage in 2:58:44 and in the same position on the general standings in 11:23:40.

“We really enjoyed it. We had the usual ups and downs as one does on a stage race, but we worked well together,” said Von Holdt, who won the PwC Great Zuurberg Trek women’s race alongside SanMari Woithe last weekend.

Bikeplus’s Lindsey Chicken and Judy Scheepers notched up an uncontested win in the women’s race, wrapping up a trio of stage wins in 2:50:07 (10:47:45).

Multiple national road champion Anriette Schoeman of Africa Silks-Bestmed successfully defended her title in the solo women’s category, taking the final stage in 2:42:46 for an aggregate time of 10:23:00.

“I wasn’t cautious on the technical descents on day one and I paid for it. So I’ve got a couple of bruises but that’s something to take home.

“It was three tough days, but luckily this time round the weather was in our favour.” 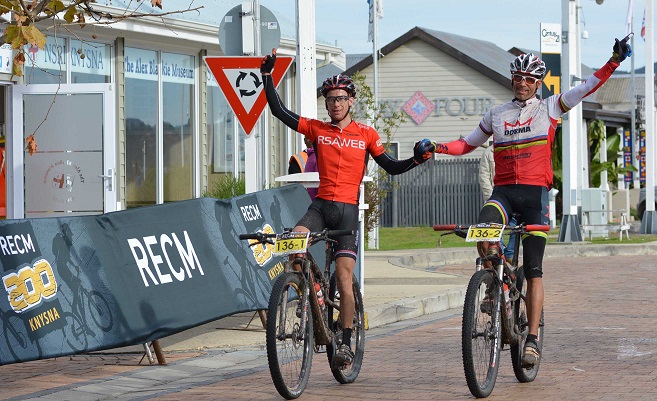