Madibaz number one Jason le Roux will be one of the hometown favourites for the men’s title in the third annual Brian Bands NMMU Open, which takes place in Port Elizabeth from June 6 to 8.

Le Roux finished third and fourth in the first two editions against some of the country’s top players, but remained circumspect about his chances of a win this year.

“Perhaps I can cause a few upsets.” He said Gary Wheadon, who has won the tournament on both occasions, would be the big favourite.

With a national ranking of seventh, the lefty from Cape Town will be the highest ranked player in the tournament.

Le Roux, who was part of the South African Knights team for their 2006/7 international tour, also tipped Greg Le Mude – a local player who went pro and has won the national title in the past.

“He is back in PE after coaching overseas for many years and will be someone to watch.”

The Madibaz star was named player of the tournament at last year’s University Sport South Africa tournament after an unbeaten run which included ousting the University of Johannesburg’s number one player Marko Becker.

For the sport science honours student, squash is not merely a sport but an activity that keeps him in prime condition mentally and physically.

“The mental side is really important; to be mentally strong and disciplined are key aspects of the game. It is also a great way of stimulating all areas of the body in 45 minutes.”

Le Roux, who focused on gymnastics as a youngster, said his passion for the game stemmed from his father’s playing days.

“I played for fun and to keep myself busy when my dad went to the courts. I only started playing more seriously after our gymnastics coach left for another province.”

Born and raised in East London, the Port Rex matriculant worked in his hometown and played squash for Border for several years before moving to the Friendly City.

“I coached and was working for myself when I decided to obtain more knowledge about sport and high performance sport in particular,” said Le Roux, who represented South Africa at the All African Junior Games in Zimbabwe in 1995.

“So, at the late age of 27, I decided to move to PE and study human movement science with the intention of doing my honours in sport science.”

Now in his final year, Le Roux said the demands of the course presented him with very little time to train.

“I only hear the word training in class or when working in the gym training others,” he quipped.

He said he maintained his fitness by playing league matches and then revved up his training before big tournaments.

“I try to play four times a week and also make sure I’m active every day so that I don’t become lethargic.”

Entrance to the Brian Bands NMMU Open, which takes place at the university’s Student Village and South Campus courts, is free of charge. 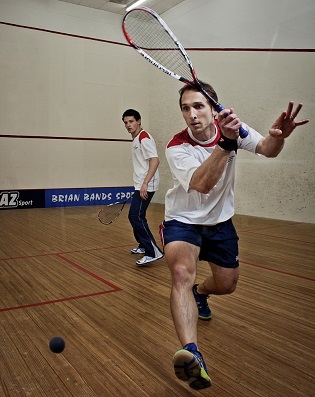 Madibaz number one Jason le Roux (front) will be one of the local stars challenging for honours in the third annual Brian Bands NMMU Open, which takes place in Port Elizabeth from June 6 to 8. Photo: Supplied