Andrew Hill and Adriaan Louw were in confident form ahead of next week’s national marathon championships as they cruised to victory in the three-day PwC Great Zuurberg Trek in the Addo area near Port Elizabeth on Sunday.

Hill and Louw, riding in the colours of Fairview-TIB, crossed the finish line at the Zuurberg Mountain Village in a time of 3:01:56 to take their third consecutive stage win and the overall title in 10:01:28.

Former roadies Andrew Mclean and Bruce Diesel of Cycle Lab-PwC powered up the Zuurberg Pass to finish second on the day in 3:06:43 and in the same position on the general classification in 10:37:30.

There was disappointment for Eastern Cape duo Grant Mac Geoghan and Jason Reed, who had held the runner-up spot overnight. Reed slashed his tyre on a rocky section within the first 5km, effectively ending the race for the Cyclo Pro-Car Spares team.

Siyaya teammates Jade Muller and Francois De Villiers rounded out the stage and overall podium in 3:19:08 for an aggregate time of 11:10:12.

According to Louw, the three solid days of racing had bolstered his and Hill’s preparations ahead of the national and world champs in Pietermaritzburg later this month.

“I think the confidence comes from a good block of training, not so much winning the race. It’s a big block that sets you up for what lies ahead.”

“This is different riding – just exciting. You’re constantly on an adventure, waiting to see what’s around the next corner.

“The organisers have got it right with the diversity of riding. It’s just such a great event and one I’d definitely encourage people to come and race.”

Veteran cyclist Mclean congratulated the winners and said he and Diesel had raced hard to claim the runner-up spot.

“Every time you line up for a race you dream of coming first, but Adriaan and Andrew are just in another league.”

After battling with punctures and accidents over the first two days, Mclean said he was delighted with the final result.

“Everything came together and we’re very happy. Today there was so much single-track I was hoping it would end – that’s how good it was.”

In the women’s race, the Port Elizabeth-based Merrell Ladies team of Andrea von Holdt and SanMari Woithe took the final stage in 3:42:48 for an uncontested overall victory in 12:50:44.

“We are very happy, we really rode our hearts out today,” said Von Holdt.

“It was a good day,” said Tait. “No flats, no mechanicals, just good hard riding.” 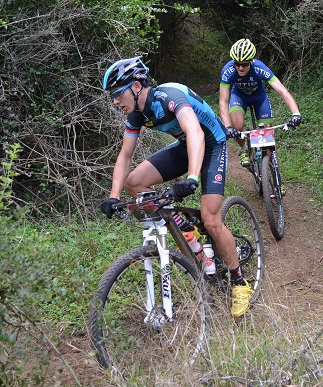 Fairview-TIB’s Adriaan Louw leads teammate Andrew Hill on the Hayterdale single-track as the two powered towards overall victory in the PwC Great Zuurberg Trek. The three-stage mountain bike race finished at the Zuurberg Mountain Village near Addo on the outskirts of Port Elizabeth on Sunday. Photo: Full Stop Communications