Reigning Wines2Whales champions Renay Groustra and Nico Pfitzenmaier will be looking to add the RECM Knysna 200 title to their list of successes when the three-day mountain bike race starts on the Garden Route next Friday (June 6).

The Cape Town-based RSA Web-Dorma duo are returning to their best stage-racing form after reuniting for this month’s Nedbank sani2c, where they placed sixth overall.

Groustra, who took a break after withdrawing from the Cape Epic in April due to illness, said he had surprised himself with how he had shaped in the KwaZulu-Natal race.

“I look forward to seeing how I’ve progressed after two weeks of solid training.”

His German teammate, who won the Magalies Monster by a comfortable margin two weeks ago, is also on song after opting out of multistage racing this season due to a broken thumb.

Groustra said the Knysna race would be an important part of his build-up towards the marathon world championships in Pietermaritzburg, while Pfitzenmaier was preparing for the seven-day BC Bike Race in Vancouver, Canada, at the end of June.

Groustra said he had decided to forego the SA champs, which coincides with the Garden Route event, as a three-day race would be better for his conditioning ahead of the international competition.

He has already qualified to compete, achieving the required top-20 finish in a UCI-ranked marathon race in the MTN Series events at Sabie and Clarens.

“I know that I am maybe not in the best form to contend for the national title, so for me coming to Knysna is the sensible choice.”

As a former winner of the Garden Route 300, Groustra said his existing route knowledge would stand him in good stead.

“I’ve raced here many times in my career and I know the area pretty well. My parents moved up here last year, so now it definitely suits me to come ‘home’ a few times a year!”

Cross-country masters world champion Pfitzenmaier is also no stranger to success at the RECM Knysna 200, having podiumed with Timo Cooper at last year’s race and in the solo category previously.

Despite their age differences, 27-year-old Groustra said he and his 42-year-old teammate had a good relationship and worked well together on the bike.

“Coming from a cross-country background, I am very good with fast starts and over very technical terrain. Nico on the other hand likes to start a little slower but is really strong at the end of a race, which helps when I sometimes fade a little.

“Because we are both very strong technically we work well in this area and are able to put pressure on our opponents.”

According to race organiser Patric Mosterd of Garden Route Events, there were still a few last-minute spots available for the event. 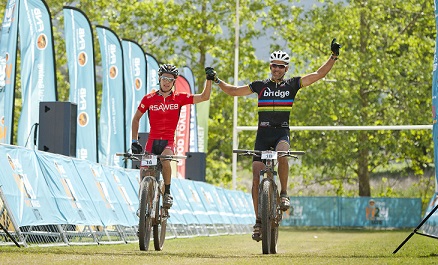 Reigning Wines2Whales champions Renay Groustra (left) and Nico Pfitzenmaier will be looking to add the RECM Knysna 200 title to their list of successes when the three-day mountain bike race starts on the Garden Route next Friday (June 6). Photo: Cherie Vale/Newsport Media