Fortune smiled on Johann Rabie and Gawie Combrinck as they rode safely into Scottburgh to claim their maiden win in the nine-day Old Mutual joBerg2c mountain bike race on the KwaZulu-Natal south coast on Saturday.

The EAI Cycling duo sprinted across the floating bridge on the Scottburgh lagoon to complete their 880km journey from Heidelberg on the outskirts of Johannesburg to the sea in 33:36:41.

They finished three minutes clear of overnight leaders Waylon Woolcock and Darren Lill, who took the runner-up spot for Cannondale-Blend in 33:39:45.

Max Knox and Kevin Evans of FedGroup-Itec outsprinted Rabie and Combrinck by a single second to win the final stage in 2:48:04, in the process securing third place in the overall standings in 34:45:27.

Third on the stage belonged to Louis-Bresler Knipe and Craig Boyes of Contego, who came home in 2:55:48 to secure fourth overall in 35:26:47.

While both pairs were alternately plagued by mechanical issues, it was Woolcock and Lill whose title hopes deflated when they suffered a serious blow-out 20km from the finish on the 84km final stage.

Forced to stop for repairs, the Cannondale-Blend riders saw their overall lead of more than six minutes ebb away. They fought back to finish sixth on the stage in 2:57:51 to fall one place in the general classification.

“I think it’s a bit unlucky for them but yesterday we had our bad luck again with two flats and a cracked rim,” said Rabie, who made his joBerg2c debut.

“That’s the thing with mountain biking, it’s never over till it’s over – not even in the last 20km of a nine-day stage race.”

Woolcock, the 2012 champion, said he and Lill were extremely disappointed with the result.

“We came here to win; not to finish second. The stage wins were nice but we would have liked the overall title.”

Woolcock said he had personally not felt on winning form during the tour.

“But I rode myself in and, as we proved yesterday, we had the legs to set the fastest time on that part of the route.”

Old Mutual’s Mokaedi Dilotsotlhe said as the title sponsor they were delighted with the success and excitement of the fifth edition of the race.

“We are especially proud of the economic contribution the race makes all along its journey to the finish. The joBerg2c is truly about racing, riding, touring and making a difference in these communities.” 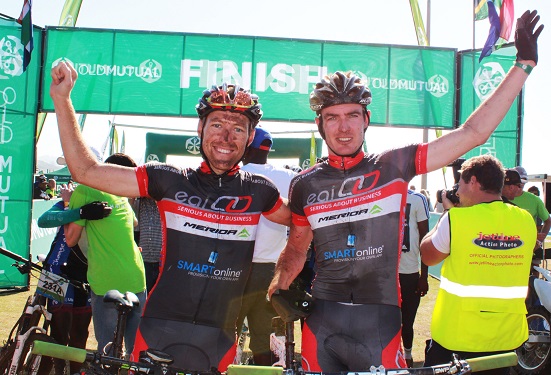