The racing took a dramatic turn on day eight of the nine-day Old Mutual joBerg2c as Darren Lill and Waylon Woolcock surged into the overall lead on the 99km stage from Ixopo to Highflats in KwaZulu-Natal on Friday.

The Umkomaas River Valley descent proved to be a watershed moment in the race, as leaders Johann Rabie and Gawie Combrinck saw their hopes of victory punctured on the penultimate stage.

Cannondale-Blend’s Woolcock and Lill took advantage of their rivals’ mechanical setbacks to forge ahead and claim the stage win – and the overall lead – in 3:45:34 (30:41:54).

The reversal of fortunes means that Rabie and Combrinck now trail Woolcock and Lill by 6 minutes 42 seconds going into the final showdown en route to Scottburgh.

Shortly after the start at MacKenzie Club, FedGroup-Itec was the first team to hit bad luck when Max Knox dropped his chain within the first 5km.

The main contenders continued to jostle for position, with Knipe and Boyes entering the single-track first for the descent into the valley.

Lill said he and Woolcock had made the right move in positioning themselves behind the Contego pair.

“Louis comes from a downhill background and his descending is excellent, so we just followed them down the descent.”

Rabie was on Lill’s wheel, with Woolcock applying pressure from behind, when the EAI riders both hit a rock and punctured. Rabie also damaged his rim in the process, forcing them to stop for repairs.

By the time the riders emerged at the first waterpoint on the valley floor, 38km into the race, Cannondale-Blend and Contego had put more than eight minutes into the EAI pair.

“Coming out of the bottom of the descent, I saw Waylon was with me and he said we had a bit of a gap,” said Lill.

“So we basically just gave it stick from there and didn’t look back.”

Having ridden away from Contego on the climb out of the valley, it was Cannondale-Blend’s turn to suffer misfortune when Lill punctured after 45km.

“But fortunately we plugged it, bombed it and got going again. It probably only cost us about 45 seconds.

“No one had caught us again at that point, so we just put our heads down.”

By the second waterpoint at 65km, Woolcock and Lill were six minutes clear of Knipe and Boyes, with Rabie and Combrinck a further five minutes back.

Combrinck and former road sprinter Rabie chased back on the district roads, eventually catching and overtaking Knipe and Boyes just before waterpoint three, 15km from the finish.

They did however not have the legs to reel in the new leaders.

Lill said he was pleased with their fourth stage win but said the race was not yet over.

“I don’t think it’s going to be easy. But it won’t be up to us to try and ride away, so we’ll just watch the EAI guys and make sure they don’t get time back on us.”

A disappointed Combrinck said he and Rabie would still race hard on the fast-paced 84km final stage.

“There’s always a stage win on the cards but as for overall goes I think we lost it today.”

In the women’s race, Amy McDougall and Janine King of Valencia Girls remain poised for an emphatic victory with another stage win in 4:48:35.

Natalie Robbs and Kathryn Ackermann of Itec Ladies followed them home in 5:33:46, with Reevax Ladies’ Heidi Buttiens and Siegrid van Bever third in 5:36:01.

McDougall and King’s time of 37:08:29 gives them an overall lead of more than three hours.

Old Mutual’s Brenda Potts and Sarah van Heerden trail them with an aggregate time of 40:21:30, while Buttiens and Van Bever round out the overall podium in 42:04:45.

Sasol Racing’s Leana de Jager and Johan Labuschagne took one back from mixed category leaders and teammates Yolande de Villiers and Franso Steyn when they won the stage in 4:31:10 (34:04:10). 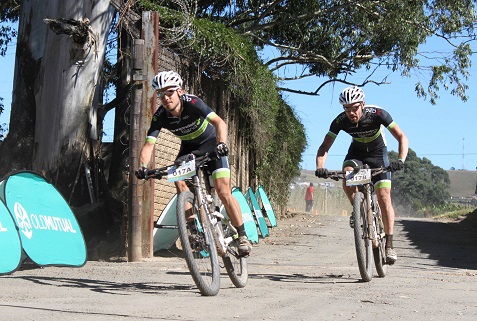