A sea of blue swept down Marine Drive on Saturday morning as thousands of women, proudly wearing their official race T-shirts, braved the cool morning air to participate in the 21st SPAR Women’s Challenge in Port Elizabeth.

And, as has become tradition, several men also lined up on the starting line donning flamboyant outfits rounded off with glitzy accessories including brightly coloured wigs, feather boas and even stilettos.

“Waking up to more than 14 000 beautiful women on a Saturday morning in Port Elizabeth is quite impressive,” quipped Pasella presenter, race emcee and event eye candy Paul Rothmann.

“But I’m going to need some therapy thanks to some of the guys I’ve seen this morning.”

By the time the race got underway, the cool morning air had made way for sunny skies which suited the elite runners, including winner Diana-Lebo Phalula who set a personal best time of 32:27 over the scenic 10km course.

“The race was so nice and the weather was great,” said Phalula, who won the Cape Town leg of the six-event SPAR Grand Prix Series last month.

Having won in PE in 2011, she said it held a special place in her heart.

“I don’t like PE, I love PE. I always run well here. The weather is great and so is the route.”

Eleven-time champion René Kalmer crossed the line a minute down in 33:27 with Mapaseka Makhanya completing the podium in 33:28.

While the SPAR Women’s Challenge attracts South Africa’s elite athletes, the 10km and 5km events are synonymous with social runners of all shapes and sizes.

Having taken part 12 times over the years, 76-year-old Rasheeda Abrahams is an avid supporter. “I walk for life, to keep fit and to have fun.”

For friends Melanie van Rensburg and Chrystal Baatjies the race was a new experience.

“The atmosphere is amazing and we are definitely coming back next year,” said Van Rensburg. “Maybe we’ll try the 10km and bring along some colleagues and friends.”

Although his attire caused a bit of challenge, Daan Zeelie said not even his thick pantyhose or tight mini-skirt would have kept him from crossing the finish line. “I’m doing this to support charity and to enjoy myself.”

SPAR Eastern Cape marketing manager Abri Swart said it was an honour to have been associated with the event for all of its 21 years and to have seen it grow every year.

“On Thursday, we had the Little Ladies’ Race where between 700 and 800 youngsters participated. This just shows the level of interest.”

He added that SPAR Eastern Cape was extremely proud to present the Association for Persons with Physical Disabilities in Nelson Mandela Bay, the official race beneficiary, with a cheque for R250 000.

The morning ended on a high note with former Idols runner-up and Sama winner Lloyd Cele entertaining participants and supporters with some of his biggest hits. 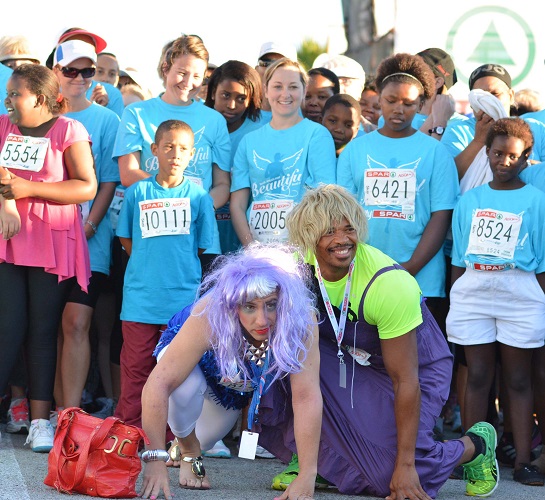