Kevin Evans and Max Knox won a suspense-filled second stage to hang onto their overnight lead at the Nedbank sani2c, which rolled out from Ixopo to Highflats in KwaZulu-Natal on Friday.

After a day of thrills and spills among the pro contenders, the FedGroup-Itec pair – who hold seven sani2c titles between them – raced into the finish at Jolivet farm to take the 99km queen stage in 3:36:58.

Unlucky RECM riders Erik Kleinhans and Nico Bell, who had chased hard in the closing kilometres, followed a minute later in 3:37:53.

Kleinhans tore his shoulder joint after taking a tumble on Charlie’s Catwalk in sight of the finish, which has effectively ended the race for the second-placed team.

Evans and Knox head the overall standings on an aggregate time of 6:19:08. Although Kleinhans and Bell lie second in 6:20:17, they will not be continuing the race.

After today’s stage, Combrinck and Rabie move up onto the bottom step of the podium in 6:22:42, just over three-and-a-half minutes off the pace.

The ride of the day however belonged to young cross-country racers Rourke Croeser and Travis Walker of Kargo Pro, who led a breakneck charge down into the mist-shrouded Umkomaas River Valley.

“Rourke and Travis are very good in the technical stuff and are the best cross-country riders in South Africa,” said Knox.

By the time they reached the valley floor, the Kargo Pro duo and Trek Racing’s Arno du Toit and Brendon Davids had opened up a three-minute lead over the chasing teams.

Then Red-E/TIB’s Andrew Hill crashed on one of the bridges before the first waterpoint at around 40km, taking Evans down with him.

“The other teams didn’t wait for us and attacked instead,” said Knox.

Slowly working their way back, Evans and Knox caught and passed the small chase group on the climb out of the valley.

By waterpoint two at the 67km mark, Du Toit and Davids had blown, leaving just the Evans/Knox and Bell/Kleinhans pairings 40 seconds behind Croeser and Walker.

With 15km to go, Evans and Knox caught the leaders, leaving Kleinhans and Bell and Combrinck and Rabie a further 30 seconds adrift.

“Rourke and Travis worked really hard. When we caught them, they helped us pace a bit and that may have cost them a few places,” said Knox.

“They deserved the win but they suffered a bit and blew, so from there it was just us to the end.”

Knox and Evans were ironically also the first casualties of the day, as the latter broke his chain three minutes before the start at MacKenzie Club.

Then it was the turn of Charles Keey, who suffered a mechanical in the opening kilometres, putting Cannondale-Blend out of contention for the stage.

Mixed leaders Ariane Kleinhans and Lourens Luus of RECM were also affected by a crash when Luus went down at the bottom of the Umkomaas descent. He however emerged unscathed and the pair ended first on the stage in 4:04:23 (7:01:08).

Igna de Villiers and Dalene van der Leek of LGE-Midas-Bells Cycling came in fourth on the day in 4:28:06 (7:44:09) to take third on the overall standings. 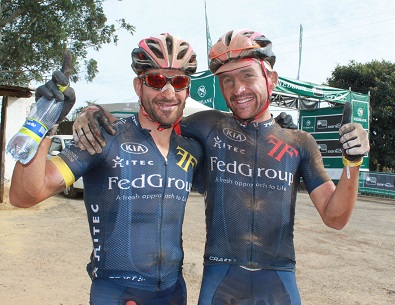