Former champions Kevin Evans and Max Knox fired the opening salvo of the 10th annual Nedbank sani2c to take the first stage of the three-day mountain bike race in KwaZulu-Natal on Thursday.

Knox and Evans (FedGroup-Itec) led from the start of the 82km stage from Underberg to power into the finish at MacKenzie Club near Ixopo in a time of 2:42:10.

Five-time winner Evans said he and Knox, who has two titles to his name, had decided to go out all guns blazing on the fast and flat stage.

“We decided to take the racing to the guys because this stage can be easy if you make it easy.”

They set the tempo on the Oak Maze single-track within the first 10km and pushed the pace on the drag up the railway climb.

“With the pace Max put on, I was on the ropes but I was also the only one who was able to sit on his wheel.

“Then RECM rode across to us and the four of us worked well together to get a gap on the rest of the field.”

By the time they reached the floating bridge over Mossbank Dam after 30km, Knox and Evans had 20 seconds on Bell and Kleinhans.

A small chase group – including Lill and Hill, Gawie Combrinck and Johann Rabie (EAI Cycling) and Rourke Croeser and Travis Walker (Kargo Pro) – was just over a minute further back.

Although Bell and Kleinhans were able to keep pace with the FedGroup-Itec pair for most of the day, it was Knox and Evans who had the legs on Tiny’s Climb at the end to forge ahead to the finish.

It was a sweet win for the FedGroup-Itec pair, who struggled with illness and technical difficulties at the Old Mutual joBerg2c two weeks ago.

“I think the little bit of bad luck and maybe the illness helped us go a bit easier. In hindsight, for preparation for this race, it was better.”

Evans said the Nedbank sani2c was an essential part of their build-up to the marathon world championships in Pietermaritzburg next month.

“I would go so far as to say the first four guys today would probably be the ‘A’ choice for the South African team but we’ll leave that one up to the selectors.”

There was high drama in the women’s race as early leader Theresa Ralph, riding with Jeannie Dreyer (Hi-Tec/USN), crashed out in the first 15km with a broken wrist.

They finished a full 16 minutes clear of second-placed Yolande de Villiers and Johan Labuschagne (Sasol Racing) in 3:12:49, who lost valuable time due to a cut tyre sidewall.

On Friday, the riders take on the 99km queen stage towards Highflats, which includes the well-known descent into the Umkomaas River Valley.

The 265km race finishes at Scottburgh on Saturday. 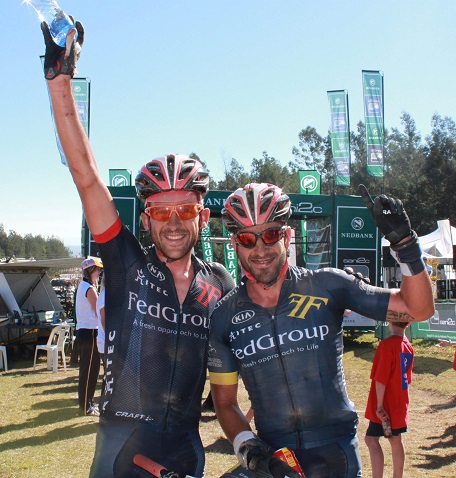