After three days of racing, the FedGroup-Itec pair finished fifth on the 85km final stage from Highflats to Scottburgh to take overall victory in an aggregate time of 8:57:45.

Kargo Pro’s young cross-country specialists Rourke Croeser and Travis Walker impressed in a rare stage racing appearance to finish on the bottom step of the podium in 9:05:21.

It was Evans’s sixth triumph in the 265km stage race – the largest of its kind in the world – and Knox’s third.

“So that’s nine wins from 10 events, which is pretty special,” said Evans.

He and Knox won the first two stages to take a comfortable three-and-a-half-minute lead into the final day.

“Today wasn’t about the stage win, we just wanted to sew up the victory for FedGroup-Itec,” he said.

“It’s been a while coming but the form is there and it’s the start of good things.”

Line honours on the day belonged to cross-country racers Arno Du Toit and Brendon Davids of Trek Racing, who outsprinted Croeser and Walker by one second to take the win in 2:35:05.

The sprint for third went to Red-E/TIB’s Darren Lill and Andrew Hill in 2:38:25, but not before a spectacular finish line crash as Lill and Rabie locked wheels.

The day’s results were just reward for the young Kargo Pro and Trek Racing teams, who also led the charge on Friday’s 100km queen stage before blowing on the climb out of the Umkomaas River Valley.

“Today I went early and fortunately Kargo Pro chased and caught up with us,” said stage winner Davids.

“There was a bit of cat and mouse throughout the stage but we timed our last attack well and hit the bridge together.

“It was tough racing but hats off to Rourke and Travis. We were trying to help them get in the top three overall, which we did.”

In the mixed category, RECM’s Ariane Kleinhans sealed her fourth straight victory alongside new partner Lourens Luus. They won the final stage in 2:48:48 for aggregate time of 9:49:56.

Kleinhans, whose husband Erik crashed out of the men’s race on day two with a torn shoulder joint, said she was very pleased with how smoothly her team’s race had played out.

“We’re very pleased with how it went today. It can always go the other way, as Erik showed yesterday.

“Lourens was really strong, sitting at the front all day. I know I can trust his wheel and he knows how to ride technical stuff.”

Igna de Villiers and Dalene van der Leek of LGE/Midas/Bells Cycling were a distant third on the final day in 3:01:09 to cement the same position on GC in 10:45:18.

South African marathon champion Robyn de Groot and Sweden’s Jennie Stenerhag, racing for Biogen Toyota-Cape Brewing Company, notched up their third stage win in 3:03:39 for their maiden victory in the women’s event in 10:36:26.

The Baeti duo of Natalie Bergstrom and Tammy Visagie rounded out the stage and overall podium in 3:21:31 and 11:57:40.

“It was our first race together and it went really well,” said De Groot. “We both had good and bad days but that’s what teamwork’s all about.”

“It was an awesome race and I’d love to come back year after year,” added Stenerhag.

Someone who will not be returning is FedGroup-Itec’s Neil MacDonald, who announced his retirement from professional mountain biking on Friday evening.

“I’ve always liked this event and I’ve had some good results here. Some things have come up and I just decided that now was the decisive moment to bow out.”

Former roadie MacDonald, 37, said he would continue to be involved in various business ventures related to cycling.

“I thought about it long and hard and I have quite a lot to offer, especially to the younger generation. Cycling’s given me so much over the years, it’s only right to give something back.” 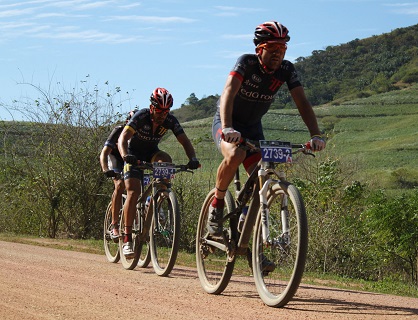