Qualifying for the University Sport South Africa national championship was a slam dunk for the young Madibaz men’s basketball team who remained unbeaten in the Eastern Province qualifiers, which finished on Sunday.

The provincial tournament saw four Eastern Cape sides – Nelson Mandela Metropolitan University (NMMU), University of Fort Hare, Rhodes University and Walter Sisulu University – battle it out for one slot in the national Ussa event, which takes place in Pretoria from June 30 to July 5.

The final round of six was played at NMMU’s Missionvale Campus, with Fort Hare going down 64-43 to the hosts.

“We have a strong team that was unbeaten throughout the tournament,” said Madibaz basketball manager Bernard Peterson.

Although the women won their last match 55-30 against Fort Hare and finished with the same number of wins as Rhodes, they just lost out on qualifying as the team from Grahamstown achieved a superior goal difference.

Petersen said he believed the men’s team had a good chance of doing well at the nationals and had their sights set on a top-five finish.

“We have a good balance of experienced players and new talent and we have been training very hard.

“However, you have to take into account that it is a highly competitive sport and that we will be up against very strong teams from Gauteng and the Western Cape,” said Petersen.

“Most of the national players are based in Gauteng, so we have our work cut out for us.”

Petersen said the experience of players like Kwabena Frimpong and Ridwaan Jobson, as well as rising stars such as John Williams and Ronald Musvibe, had been key in helping the team qualify.

“We will count on these players to boost the team in Pretoria.”

Although basketball is still a relatively young sport at NMMU (introduced in 2005), Petersen said he believed there had been tremendous growth and development.

“We have gained valuable experience over the past few years and have built up momentum, which will stand us in good stead against the country’s best.”

To ensure that the Madibaz will be ready, Petersen said they had been training between three and four times a week.

“We have two official days of training, but, if the venue is available, we try and squeeze in more.” 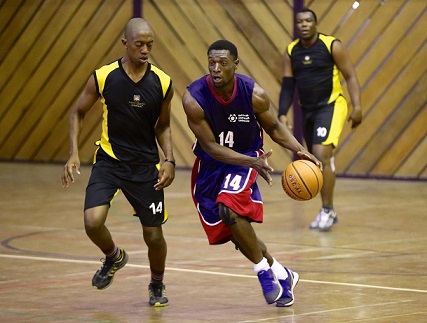 Madibaz’s Kwabena Frimpong drives towards the basket during the Eastern Province Ussa qualifying tournament over the weekend. Photo: Richard Huggard