The Cannondale-Blend duo powered into the finish at MacKenzie Club near Ixopo in KwaZulu-Natal in 2:54:48, six seconds clear of the EAI Cycling frontrunners.

Third-placed Kevin Evans and Max Knox of FedGroup-Itec staged a fightback on the 81km route from Underberg. Their time of 2:55:21 saw them return to a podium position in the general classification.

Although Woolcock and Lill clocked a record stage time, it was not enough to dent Combrinck and Rabie’s overall lead, which now stands at a respectable five minutes and 32 seconds.

Evans and Knox signalled their intent when they went out all guns blazing on the speedy seventh stage of the nine-day mountain bike race.

They pulled hard on the front, leading Cannondale-Blend and EAI Cycling into the Oak Lane dual single-track and across the PG Bison floating bridge at Mossbank Dam.

“FedGroup-Itec set quite a hectic tempo from start to finish,” said Woolcock, who won the event in 2012.

“We were quite happy for them to do all the work today. They would never have won the stage with the way they paced all day.”

The top three teams stayed together through both waterpoints and the pine plantations that characterised most of the route.

“I put my nose on the front once and Darren once, not because we wanted to, but because we just seemed to get a better line through the single-track,” said Woolcock.

With Evans and Knox faltering a little on Tiny’s Climb, the final drag into MacKenzie Club, it was up to Woolcock and Lill to bring it home.

“Both Darren and I seem to have a bit of a kick over the other guys in the sprints, so it suited us to take it to the line.”

He said Friday’s 99km penultimate stage, featuring the famed Umkomaas River Valley descent, promised to be another tough and technical day of racing.

“There can be big gaps tomorrow, so we’ll just take it as it comes.”

In the women’s race, Janine King and Amy McDougall (Valencia Girls) came storming back for the stage win in 3:34:20 (32:19:54) after struggling with a broken frame the previous day.

“It’s nice to finish on a bicycle. It always makes a difference,” laughed King, who ran the last few kilometres on day six.

They extended their overall lead to almost one hour and 20 minutes over Old Mutual runners-up Sarah van Heerden and Brenda Potts, who came home in 3:53:29 (33:39:00).

Aramex’s Liesl Lourens and Lora Hirst finished third on the day in 3:55:12, but it was not enough to unseat Belgium’s Heidi Buttiens and Siegrid van Bever of the Reevax Ladies team. The latter’s 4:12:39 kept them safely in the top three in the standings (36:28:44).

The race culminates on the main beach at Scottburgh on Saturday. 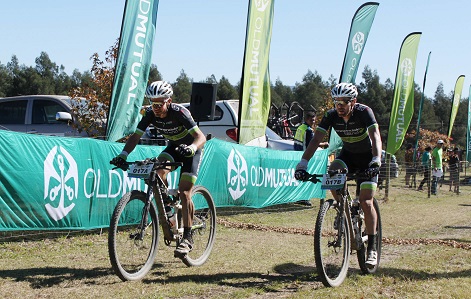