Mountain biking enthusiasts have a final window of opportunity to ride one of the Eastern Cape’s most scenic and diverse stage races before entries for the PwC Great Zuurberg Trek close on Monday.

The second edition of the three-day race, which centres around the Zuurberg mountain range just outside Port Elizabeth from May 30, traverses the Sundays River Valley and Addo Elephant National Park with the plateau offering stunning views over the Great Karoo.

The 200km course also takes in manageable sections of the national champs cross-country and downhill course at Hayterdale Trails, allowing even novice stage racers the thrill of testing their technical skills.

According to race organiser Brad Jackson, the field for the exclusive event would be limited to just 120 two-person teams.

“This is about enjoying a premium experience. It’s real mountain biking in pristine surroundings but with all the creature comforts at the end of the day.”

As the official race village, the four-star Zuurberg Mountain Village would host all meals, prize-givings and stage briefings, said Jackson.

“The entire establishment has been booked out for our riders with the overflow being accommodated in the bungalows at the campground across the road.”

While the luxury options were already fully booked, he said those teams that entered before the closing date would get their own private rooms with two single beds and shared ablutions.

“Our riders won’t have to brave the winter chill in a tent and will be well rested at the start of each stage.”

While last-minute entries would be too late to receive the official race kit, Jackson said the branded gear would be sent to those participants after the event.

Set amid one of the province’s prime tourism hotspots, he said race participants could stay on after the event to enjoy Big Five game viewing at the national park or one of the many private reserves in the area.

Airport shuttle services would be available for out-of-town riders and their bikes, said Jackson. 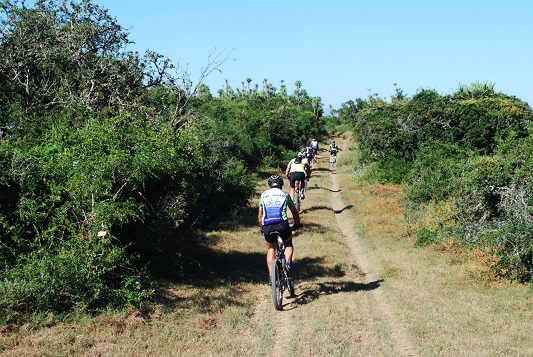 Mountain biking enthusiasts have until Monday to secure their spot in the three-day PwC Great Trek, which takes place just outside Port Elizabeth from May 30. Photo: Supplied