Overnight leaders Andrew Hill and Adriaan Louw stamped their authority on the PwC Great Trek to take a commanding victory on day two of the three-stage race at Addo on the outskirts of Port Elizabeth on Saturday.

The TIB-Fairview duo powered across the southern and northern ridges of the Zuurberg mountain range to claim the gruelling 81km queen stage in 4:02:12.

Eastern Cape duo Grant Mac Geoghan and Jason Reed, riding in the colours of Cyclo Pro-Car Spares, followed a distant second in 4:16:52, with Andrew Mclean and Bruce Diesel of Cycle Lab-PwC rounding out the day’s podium in 4:25:59.

The top three teams got off to a flying start as they entered the remote northern section of the Addo Elephant National Park, which is not open to the public.

Less than five kilometres into the stage, Port Elizabeth’s Mac Geoghan and Reed upped the pace down the White Knuckle horsetrail descent, which took riders into the White River Valley via numerous tight switchbacks.

“They seemed to know that single-track and what to expect, so they really pushed the envelope going down the hill,” said Hill.

“Adriaan was actually first going in and then we had one of their riders get in between us. We didn’t want to do anything stressful or take any risks, so we just sat on their wheels.”

With Louw forced to stop and make an adjustment to his bicycle, the pair dropped off on the Monty’s Python climb out of the valley leading up to the first waterpoint at the 15km mark.

“It didn’t take long and then we climbed back on. As we got back to them, I accelerated and we were able to ride away from the guys.”

Hill and Louw slogged on at a solid pace to extend their lead over the ensuing kilometres that included the infamous Stepsisters, three tough climbs that took riders to the highest point of the day.

By the third waterpoint at the 46km mark, the pair had opened up a seven-minute gap on Mac Geoghan and Reed, with Mclean and Diesel a further minute adrift.

“We knew we could try and put a bit of pressure on the guys on the bumpy stuff along the top of the northern ridge.”

Behind them the Reed/Mac Geoghan and Mclean/Diesel combinations were duking it out for second place.

The Cycle Lab-PwC veterans had caught the Cyclo Pro-Car Spares riders after 30km and tried to break them along the ridgeline but the youngsters pulled a small gap on the technical climbs, which they managed to hold until the finish.

Although Hill and Louw take a comfortable margin into the third and final stage, the former said nothing would be certain until they crossed the finish line at the Zuurberg Mountain Village.

The stage traverses the national cross-country course at Hayterdale before climbing the Zuurberg Pass to the finish.

“We’ll enjoy Sunday’s cross-country stage and go for the stage win but if the guys with local knowledge are around us, we might take it easy and just try and hold the lead.”

In the women’s race, the Merrell Ladies team of Andrea von Holdt and SanMari Woithe took a second uncontested stage win in 5:33:36 (9:07:56). 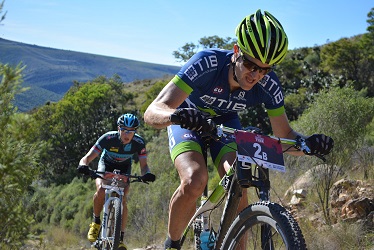