Mountain bikers Andrew Hill and Adriaan Louw turned in a workmanlike performance to claim the opening stage of the three-day PwC Great Zuurberg Trek at Addo just outside Port Elizabeth on Friday.

The TIB-Fairview riders set a tempo that few could match to finish the 74km route, which started at the Zuurberg Mountain Village and finished on the national cross-country course at Hayterdale in the Sundays River Valley, in 2:57:25.

PE-based duo Grant Mcgeoghan and Jason Reed, riding in the colours of Cyclo Pro-Car Spares, were second in 3:00:56.

Racing together for the first time, Hill said he and Louw had decided to set a hard pace on the first 10km of dirt road to gauge their opposition and the lay of the land.

“Mcgeoghan and Reed sat with us quite nicely.”

Then, on the first climb around 6km into the stage, Hill and Louw went on the attack and pulled clear of their rivals.

“From there it was just unbelievable; really, really spectacular,” said Hill.

By waterpoint one at Slagboom Dam, around the 18km mark, they had opened up a lead of more than a minute over Mcgeoghan and Reed.

By the second waterpoint, 35km into the stage, they had extended that lead to more than two minutes, with Mclean and Diesel a further three minutes adrift.

“We basically just set a solid tempo, making sure we consolidated a good lead but not taking any stupid risks. There are still two days of racing ahead.”

Hill, who finished fourth at the Nedbank sani2c earlier this month alongside Darren Lill, said he was still nursing a sore leg after a bad crash at the KwaZulu-Natal race.

The Hillcrest resident said Saturday’s 81km queen stage, which featured almost 2 000m of climbing, would be the tough and decisive one.

“Andrew and Bruce are always ones to watch. They might have played their cards close to their chests today,” said Hill.

“Tomorrow’s going to be a hard stage. The idea is to see if we can put a bit of pressure on them and the other guys in second place and see what happens.”

Climber Louw, who is based in Paarl, said he was looking forward to the ascents and that it provided the ideal prep ahead of a busy block of racing that included the national and world marathon championships.

“It’s just great to be out here; it’s beautiful and the trails are really cool. I’ve always wanted to ride here and this is just the perfect event to do that.”

His partner echoed his sentiments regarding the route.

“There were stages today where we were riding and we thought, ‘Wow this is awesome!’ This is what riding’s about and it’s definitely an event that more people must come and do.”

The race finishes at Hayterdale Trails on Sunday. 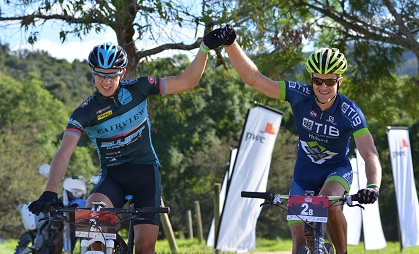