Mountain bikers will have a final chance to enjoy one of the Central Drakensberg’s most challenging stage races when entries for the FedGroup Berg & Bush reopen on Monday, June 2.

According to organiser Gary Green, participants in October’s eighth edition could look forward to brand-new innovations such as the 13km Drakensberg Drop and a dedicated racing section up Spioenkop.

Green said the online entry portal would open at 10am and close as soon as the event reached capacity.

“Preference will be given to those riders who are already on the waiting list.”

Originally started as a two-day race in 2006, the KwaZulu-Natal event has now grown to include two three-day options, with a combined prize purse of R250 000.

The 2014 event kicks off with the flagship Descent on Friday, October 10, followed by the Great Trek on the Tuesday, while the original two-dayer brings proceedings to a close the following Friday.

With the weekend events almost at capacity, Green said both solo and team entries would be accommodated for the Great Trek.

“It is also the official competitive event for the elite women, so they can enjoy unencumbered racing in a smaller field.”

He said participants in the three-day races would be the first to ride the Drakensberg Drop, which plunges over 600 metres from the escarpment into the Sandspruit Valley below.

“This section includes a reconstructed Solly’s Folly and exhilarating tracks cut into the sides of the mountain.”

The route continued through natural berg forests and single-track along the river, said Green.

“Weather permitting, all three races will also be going over the iconic Spioenkop, with the added feature of a race to the top.”

He said prizes would be awarded to the fastest men and women over the 1.5km distance.

“We’ll hopefully be making a sponsorship announcement in this regard shortly.”

Every year, said Green, participants could look forward to something different.

“As usual with Berg and Bush we tend to create new sections every year and it will be the same this year.

“So many people in our area, including the neighbouring farmers, have started riding mountain bikes and this just means that many more exciting trails are being discovered.”

Enter online from 10am on June 2 at www.bergandbush.co.za. 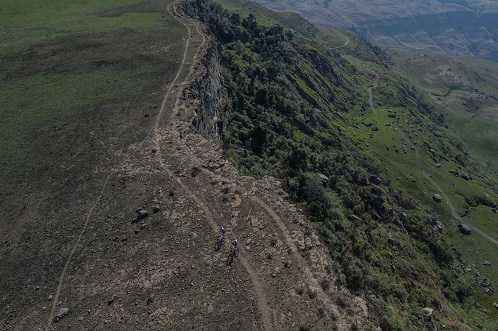 Mountain bikers will have a final chance to enter this year’s FedGroup Berg & Bush on Monday, June 2. The three-day race starts near Winterton in October. Photo: Kelvin Trautman