Woolcock and Lill, riding in the colours of Cannondale-Blend, attacked three-quarters into the 98km stage between Winterton and Kamberg in the KwaZulu-Natal Midlands to leave their opponents in their dusty wake.

They stormed into the finish at Glengarry Resort to win in 3:44:22, with EAI Cycling’s Rabie and Combrinck following two minutes and 27 seconds later.

Also boasting two stage wins, Rabie and Combrinck (20:33:42) saw their overall lead of more than six minutes slashed to a more containable three minutes and 48 seconds over Woolcock and Lill (20:37:30).

FedGroup-Itec’s Kevin Evans and Max Knox finished third in 3:48:54 and remain in the same position in the general classification (20:53:37).

Woolcock, who won in 2012 alongside Neil MacDonald, said he was very pleased with his team’s result after his struggle the previous day.

“I felt a bit better today but I’m not where I’d like to be yet. Going into the stage, we knew that a six-minute deficit was quite a big gap for a fast race like joBerg2c.”

With the major climbs of the day only looming after the 50km mark, he said the elite field had stayed together most of the way.

Woolcock and Lill, a former national road champion, decided to test their rivals on the climb out of Zulu Waters Game Reserve, which led up to waterpoint two at 70km.

“So I set quite a steady tempo up the climb. Darren let me go for a bit and then he jumped across and from there we just drove it to the finish.”

He said the move had successfully splintered the lead bunch and that it had been a hard day’s riding all round as they headed out of the thornveld towards the Drakensberg.

It was an especially tough day for Karan Beef riders Hanco Kachelhoffer and Chris Wolhuter, who had to chase back after slicing a sidewall early on – and in turn they found themselves being chased by a rhino in the reserve.

Despite this excitement, Kachelhoffer and Wolhuter managed a top-five finish.

Woolcock said he was glad that Rabie and Combrinck had also ridden the last part of the stage alone.

“That means they put in just as big an effort as we did. We’ve now closed the gap to a more manageable one but we’ll see what happens tomorrow; hopefully my legs are slowly returning.”

He said Wednesday’s 91km sixth stage to Hazeldean farm near Underberg would be another challenging one.

In the mixed category, it was a two-horse race between the Sasol Racing pairs of Yolande de Villiers and Franso Steyn, and Leana de Jager and Johan Labuschagne.

With Biogen Toyota’s David Cooke – one half of the overnight leaders – withdrawing with a broken collarbone, the teammates were left to duke it out among themselves.

Steyn said he and De Villiers had attacked early on and built up an early advantage.

“We then had a mechanical and they closed the gap, but we attacked again. It worked for us; we went ahead of them after the second waterpoint and just kept on pedalling.”

The Belgians’ strong performance on the day was not enough to topple Avis Van Rental’s Alison Richardson and Rob Dormehl from third place overall (24:02:51).

Janine King and Amy McDougall of Valencia Girls continued their total dominance of the women’s race.

The 880km stage race finishes on the beach at Scottburgh on Saturday. 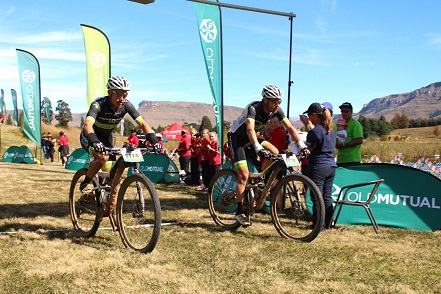 Darren Lill (left) and Waylon Woolcock of Cannondale-Blend claim their second stage victory on day five of the Old Mutual joBerg2c in the Kamberg region of KwaZulu-Natal on Tuesday. Photo: Jason von Berg