Organisers of the FedGroup Berg & Bush mountain bike stage race have introduced an exclusive “glamping” accommodation option for this year’s event, which starts near Winterton in KwaZulu-Natal in October.

Race director Gary Green said riders who opted for the premium “glamour camping” package would enjoy all the perks of the newly built campsite on the banks of the Tugela River.

Emseni Camp, in the shadow of Spioenkop, plays host to the three-day Descent, Great Trek and Two-Day races that make up the event.

“This year, we’ve created a beautiful, tranquil new spot a little further away from the existing tented camp,” said Green.

He said building on the site had started after the 2013 event, with grass and tree planting recently completed.

“It’s really nice and shady now, so you’ll be able to pull up a couple of chairs and relax after your ride.”

Instead of the standard small domed tents, Green said the new site offered around 50 large safari tents with two beds in each for a comfortable night’s sleep.

In addition, he said, the camp would have its own little pub as well as physiotherapy massage services and improved ablution facilities.

“It’s ideal for corporates who want to entertain their clients after a hard day’s riding or for friends and family to socialise together.”

Green said the campsite would be situated approximately 500 metres from the main race village, with a shuttle service running between the two.

“All riders will eat together in the main marquee tent, so you can still enjoy the vibe and atmosphere of the race village.

“But when you’re done, you just catch the shuttle back to the relative peace and luxury of your own private campsite.”

He said the glamping option would be open to participants in all three of the races that the FedGroup Berg & Bush comprised.

“If you prefer a little more comfort, you no longer have to stay in a hotel or drive all the way to a B&B.”

Green said group and corporate packages would be available on a first come, first served basis.

“So if you want to bring a number of clients or friends, we’ll customise a package for you that includes your entry and tent fees.”

The three-day routes start near Sterkfontein Dam in the Free State and feature a spectacular drop off the escarpment into KZN, while the two-day event is more suited to first-time stage racers and crosses the picturesque Spioenkop Dam and Game Reserve. 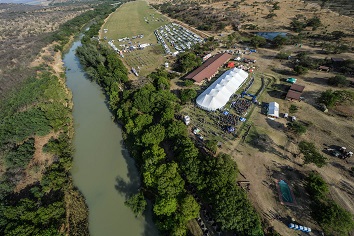