Waylon Woolcock and Darren Lill came charging back to draw level with overall leaders Johann Rabie and Gawie Combrinck on the gruelling 123km third stage of the Old Mutual joBerg2c on Sunday.

In a reversal of the previous day’s racing, the Cannondale-Blend duo outsprinted the EAI Cycling pair by a single second, crossing the finish line at Sterkfontein Dam near Harrismith in the Free State in 4:29:27

The two teams now share the top spot on the leader board with a combined time of 12:22:44.

Karan Beef’s Hanco Kachelhoffer and Chris Wolhuter rounded out the day’s podium in 4:36:41 to secure the same overall position in 12:30:05.

The racing started cautiously on the district roads around Reitz, with a big lead bunch rolling together for most of the stage.

According to Lill, the first real opportunity to split the group came around 75km into the course on the Jabulani single-track.

“We got into the front along the first bit of single-track and just set a bit of a tempo, which made the group a little smaller and more manageable.”

The selection of five teams and a couple of solo riders included Contego’s Louis-Bresler Knipe and Craig Boyes, as well as FedGroup-Itec’s Max Knox and Kevin Evans.

“We knew the last 30km of the stage would be hard after going over Mount Paul for the first time last year,” said Lill.

“There was a lot of hard, draggy single-track before the climb. We skipped the final feed zone and set the tempo through the last section.”

Their strategy split the leaders even further, with only Combrinck and Rabie able to stay with them.

“We set a fairly hard, steady tempo all the way up the climb and had quite a big gap at the top. So we took it quite conservatively on the descent, made sure we didn’t take any wrong turns and kept it together to the line.”

Woolcock, who won the corresponding stage last year, said the racing had played out differently from what he had expected, based on previous experience.

“All in all it went well; we’ve got some good time over our competitors.”

He said the 121km fourth stage, which would see the field of over 800 riders descend off the Drakensberg escarpment into KwaZulu-Natal, would be a telling one.

“Tomorrow’s going to be an extremely tricky stage with regards to the GPS navigation. Once you get into those thorny bush areas, there are lots of foot and cattle paths so it’ll be quite a challenge for everyone.”

They were followed home by Robyn de Groot and David Cooke of Biogen Toyota in 4:50:35, with Yolande de Villiers and Franso Steyn, also of Sasol Racing, two seconds further back.

Labuschagne said they had decided to attack with 10km to go and let the Biogen Toyota duo chase.

“If they had caught us then our other team could have countered but they didn’t, so we’re over the moon.”

Amy McDougall and Janine King, riding in the colours of Valencia Girls, consolidated their overall lead in the women’s race with a convincing stage win in 5:11:03.

Their combined time of 13:32:43 puts them almost half an hour clear of nearest rivals Brenda Potts and Sarah van Heerden of Old Mutual, who finished in 5:31:57 for an aggregate time of 13:58:45.

The race finishes in Scottburgh on Saturday. 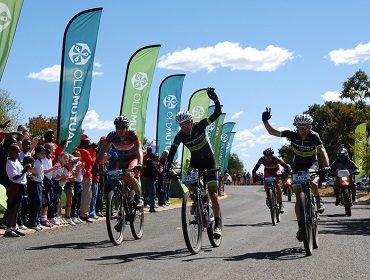