Race leaders Johann Rabie and Gawie Combrinck stamped their authority on the nine-day Old Mutual joBerg2c mountain bike race as they rode away from Sterkfontein Dam in the Harrismith district, and their nearest rivals, on Monday.

The EAI Cycling duo conquered the 116km fourth stage, which featured a spectacular 2 000m plunge off the Drakensberg escarpment into KwaZulu-Natal, in a time of 4:24:09.

They charged into the finish at Winterton Country Club a full six minutes and 15 seconds clear of Cannondale-Blend’s Waylon Woolcock and Darren Lill who had shared the overnight lead with them.

The FedGroup-Itec team of Max Knox and Kevin Evans chased Woolcock and Lill to the line to round out the top three a second later.

The crucial stage win cements Rabie and Combrinck’s position at the top of the leaderboard with an overall time of 16:46:53.

After another frosty start in the Free State, the top three teams set a steady pace on the first few climbs, shedding the rest of the field within the first 10 kilometres.

With Woolcock starting to struggle on the ascent up to the Great Wall My China plateau, Rabie and Combrinck used the opportunity to attack and open a gap on their opponents.

They led the charge down Sollie’s Folly and by the first waterpoint at the bottom of Bezuidenhout’s Pass, 44km into the stage, they had extended their lead to a minute and a half.

By the second waterpoint at the 77km mark, the elastic had snapped, with EAI more than three and a half minutes ahead of the chasing teams.

They played it safe on the technical sections but then put the hammer down on the flat roads to open up an unassailable lead towards the finish.

Former road sprinter Rabie, who showed his mountain biking ability over the past four days, said he and Combrinck were very happy with their win.

“We worked well as a team and rode within ourselves today, so that we have something left in the tank for the rest of the tour.”

Rabie said they would certainly not be resting on their laurels in the remaining stages of the Old Mutual joBerg2c and would work hard to preserve their lead.

“With mountain biking, the one thing I’ve learned is that you can have half an hour gap and it doesn’t mean anything. One bad mechanical and that’s it.”

In the mixed category, the stage ended in a dead heat between overall leaders Robyn de Groot and David Cooke (Biogen Toyota) and Yolande de Villiers and Franso Steyn (Sasol Racing Mixed) as both teams crossed the line in 5:07:42.

Disaster struck however when Cooke was forced out of the race with a suspected broken collarbone.

He and De Groot currently lead the general classification in a combined time of 17:57:07, with De Villiers and Steyn their nearest challengers in 17:58:04.

De Jager and Labuschagne move down into third overall in 18:05:18.

The 98km fifth stage is from Winterton to Kamberg on Tuesday. 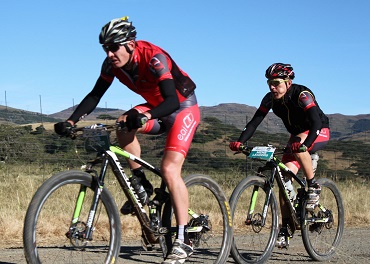 EAI Cycling’s Johann Rabie (left) and Gawie Combrinck stamped their authority on the Old Mutual joBerg2c with their second stage win on day four of the nine-day mountain bike race at Winterton in KwaZulu-Natal on Monday. Photo: Full Stop Communications