Johann Rabie and Gawie Combrinck held their nerve in a four-team sprint to win the stage and secure the overall lead on day two of the Old Mutual joBerg2c mountain bike race on Saturday.

The EAI Cycling team claimed the 93km stage from Frankfort to Reitz in a time of 3:20:03 as the serious racing got underway in the nine-day race.

They were chased all the way to the line by the Cannondale-Blend combination of Darren Lill and Waylon Woolcock (3:20:04), with FedGroup-Itec’s Kevin Evans and Max Knox rounding out the podium five seconds later.

The racing got off to a frosty start, as the riders slowly warmed up their legs on the flattish route through the Free State. All the elite teams were in the mix as a large bunch rolled through the first two waterpoints together.

Shortly after the second waterpoint, around 67km into the race, disaster struck for the Contego pairing of Craig Boyes and Louis-Bresler Knipe when the latter sustained a ligament injury to his knee, forcing them to drop back.

Fitzpatrick and Beneke were distanced just before the fast Red Bull Run section, which came after 82km, leaving just four teams to dice it out in the closing kilometres.

Lill and Woolcock drove the pace but Woolcock was unable to stay on his teammate’s wheel in the final dash to the line.

Rabie said he was delighted with his team’s performance in his first attempt at the 880km race.

“We’re very happy with the win today and look forward to some more wins later in the tour.”

Rabie said there was still a long way to go and that riders were conserving their energies for the latter stages.

“The real racing will commence a little later when the climbs start coming.”

In the women’s race, Valencia Girls’ Amy McDougall and Janine King took an uncontested victory in 3:48:27.

They were followed home by Old Mutual’s Brenda Potts and Sarah van Heerden in 3:53:35, with Reevax Ladies’ Heidi Buttiens and Siegrid van Bever third in 4:23:22.

Former single-speed world champion McDougall said she and King were feeling strong and riding well together.

“We set a nice tempo and didn’t push too hard. We just need to take it easy and stay level-headed.”

De Groot said she was very happy with the result but said that she and Cooke had their work cut out for them given the strength of their competition.

“It’s the first time David and I have ridden together, so I thought for the first day of racing it went pretty well.”

On Sunday, more than 800 riders will take on the 122km third stage from the Reitz showgrounds to Sterkfontein Dam near the KwaZulu-Natal border. 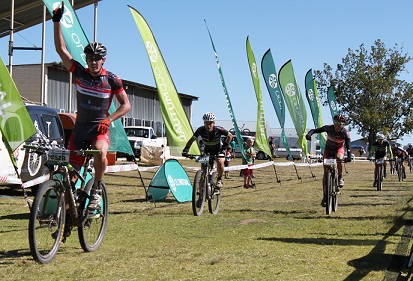