After impressive performances in the run-up to the final of the Momentum National Club Cricket Championship, the NMMU-Madibaz once again came unstuck against Tuks at SuperSport Park in Centurion on Monday.

Tuks batted first and laid the foundation for a third consecutive title with an imposing score of 316/6 in their 50 overs. In reply, the Madibaz lost early wickets and never fully recovered to be bowled out for 222 in 40 overs – 94 runs short.

“We have played in the final four times in the past six years,” said Madibaz cricket manager Riaan Osman after his team’s second loss in-a-row against the defending champions.

The Port Elizabeth side secured their place in the final with a 10-wicket thrashing of the University of Johannesburg at the weekend, while Tuks beat NMMU George by seven wickets.

It was the first time that two teams from NMMU have competed in the national event after the side from George qualified by winning the South Western Districts Premier League.

“I’m very proud of the team, who were unbeaten right up the final. They did very well and were outplayed by a better team on the day.

“We just could not string partnerships together after losing key wickets early on.”

Osman said the team had improved throughout the tournament after a tricky opener, which they won by a mere six runs. “But they got the momentum going and kept it going.”

Madibaz bowler Brad Dolley – who had just returned to cricket after being out of action for 12 months following a shoulder operation – stole the show with 17 wickets in the tournament.

On the batting side, David White and Edward Moore proved to be the proverbial flies in the ointment for the opposition. Moore scored 296 runs at an average of 59 and White 211 at 42.

Osman said Lloyd Brown took responsibility as a key player with two unbeaten 50s in the tournament after James Price was injured in an accident on his way to the airport.

“We had a few challenges, especially with injuries, but these challenges provided opportunities for players like Brown to shine.”

With the tournament marking the end of the cricket season, players have about a month to relax and put their feet up before the winter programme gets under way. 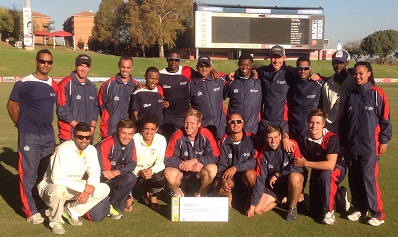 The NMMU-Madibaz lost to Tuks in the final of the Momentum National Club Cricket Championship at SuperSport Park in Centurion on Monday. Photo: Supplied