The pro field made a cautious start to the nine-day Old Mutual joBerg2c mountain bike race as they negotiated a new floating bridge over the Vaal Dam and assessed the competition on the neutral opening stage on Friday.

More than 800 riders rolled out on the 116km satellite-navigated stage from Heidelberg in Gauteng to Frankfort in the Free State, crossing the provincial boundary on the 400m floating pallet bridge.

The elites conserved their energies on the flat and fast stage, with the Sasol Racing mixed team of Leana de Jager and Johan Labuschagne crossing the line first at Wilgerivier High School in 4:33:13.

The major men’s contenders were all in the mix as Gawie Combrinck and Johann Rabie of EAI Cycling came home in a time of 4:38:09.

Also in the top 20 were the Karan Beef pairing of Hanco Kachelhoffer and Chris Wolhuter in 4:43:57, with EuropcarSA roadies Calvin Beneke and Stuart Fitzpatrick a second behind.

Contego’s Craig Boyes and Louis-Bresler Knipe cruised home in 4:46:17, while Cannondale-Blend’s Darren Lill and former winner Waylon Woolcock played their cards close to their chest to finish a further four minutes back.

The first women’s team home was the Valencia Girls duo of Janine King and Amy McDougall in 5:00:41.

Knipe said the real danger men would show themselves on stage two but named the combinations of Woolcock and Lill, Evans and Knox, and Rabie and Combrinck as the ones to watch.

He said it was early days yet, with the route getting more technical as the race progressed and the real mountain biking challenges still ahead.

“And of course the new GPS navigation will be a factor. There could definitely be some short cuts and detours along the way.”

With FedGroup-Itec’s defending champions Neil MacDonald and Brandon Stewart not competing this year, the 880km event will be anyone’s game.

The racing starts in earnest on Saturday with the 93km second stage from Frankfort to Reitz in the eastern Free State. 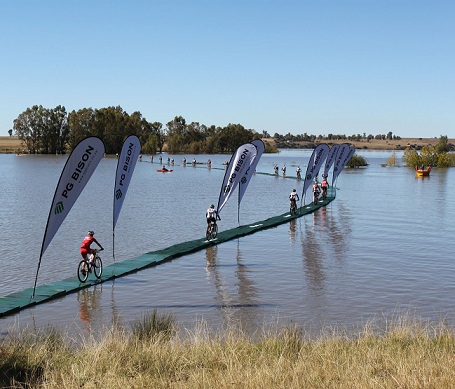 More than 800 riders rolled out from Heidelberg, just south of Johannesburg, on the 116km neutral opening stage of the nine-day Old Mutual joBerg2c on Friday. The mountain bikers crossed the Vaal Dam on a new 400m floating bridge en route to the finish at  the Wilgerivier High School in Frankfort. Photo: Full Stop Communications