Madibaz all-rounder Kirwin Christoffels is one step closer to achieving his dream of padding up for the Proteas after an impressive showing at the recent ICC U19 Cricket World Cup in the United Arab Emirates.

The South Africans were a force to be reckoned with throughout the tournament, progressing convincingly through their matches before defeating two-time former champions Pakistan in the final.

The World Cup took place from February 14 to March 1 with the cities of Dubai, Abu Dhabi and Sharjah hosting the various matches.

The young South Africans came up against the West Indies, Canada and Zimbabwe in the group stages, before eliminating Afghanistan in the quarterfinals and Australia in the semis.

“The UAE was an amazing experience on and off the field,” said Christoffels.

“When we were not playing, it was nice to see how a different part of the world operates. Things like the manner in which people behave and how they eat different foods, or avoid certain foods or liquids to stay healthy.

“On the field was another great experience, especially in terms of growth,” said Christoffels, who said it was a learning curve to have to adapt to different and sometimes unusual playing conditions.

“I also gained a lot from those around me, especially coach Ray Jennings.”

A second year accounting student at NMMU, he said a personal highlight was his debut against Canada in which he scored a half-century.

“I also cherish the friendships I formed and will always remember going on a desert drive and visiting Ferrari World. But the cherry on top was lifting the trophy and completing the objective.”

Selected as a batsman with the ability to bowl when called upon, the former Queen’s College pupil did duty at number three at the World Cup.

“I fell in love with cricket at a very young age, watching the game with my dad. I also have fond memories of him playing with me and my little brother,” said Queenstown-born Christoffels.

He said playing club cricket for the Madibaz and attending the EP Cricket Academy last year taught him a great deal. This led to impressive performances at the University Sport South Africa Cricket Week in December, after which he was selected for the national universities team.

Then, at the Cricket SA Cubs Week, he was selected for the U19 World Cup squad.

“I would like to start playing first-class cricket and then progress to franchise cricket with the ultimate goal of representing the Proteas,” said Christoffels.

“I love the mental battle in cricket as you are challenged to overcome what your opponents have planned for you.” 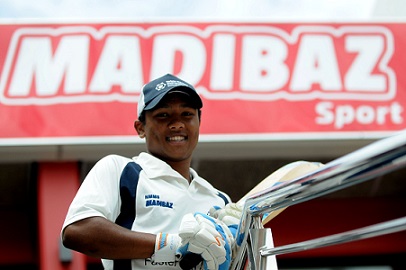