The Eritrean national road champion claimed the 138km third stage from Tulbagh to Riebeek-Kasteel in a time of 3:22:45 in searingly hot and windy conditions.

Teshome said he was very happy to take his first stage win on South African soil but that his team’s sole aim had been to keep the yellow jersey safe.

He was part of the decisive 11-man break – which included Dougall and stage two winner Waylon Woolcock (Cannondale Blend) – that went clear at the halfway mark.

A handful of riders managed to bridge the gap in the vicinity of Piketberg but strong crosswinds split the field even further, allowing the breakaway group to open a margin of almost two minutes.

By the time they turned onto the N7 towards Moorreesburg, they had stretched that lead to more than five minutes.

“Today the race was very hard and windy,” said Teshome.

“It was our job to pace the first group because the second guy overall (Darren Lill) was not with us and we needed to create a bigger time gap.”

With 15km to go, Kevin Evans of FedGroup-Itec led a four-man attack that was quickly hauled back.

ASG’s Ryan Felgate was next to try and quickly built an advantage of 10 seconds before he was reeled in on the outskirts of Riebeek-Kasteel.

Then it was left to the 21-year-old East African to power his way up the short drag to the finish in the town.

Defending champion Dougall said he was proud of his teammate’s performance.

“He’s a real powerhouse; he paced and worked on the front all day and still won. He’s a machine.”

Dougall said his outfit would be looking for the overall win but that anything could happen on the final stage, which featured the make or break mountaintop finish on Franschhoek Pass.

He said they expected strong challenges from the likes of the Czech Republic’s Giro d’Italia stage winner Frantisek Rabon (Meerendal-Songo.info).

“Both Rabon and Woolcock were strong again today. But we’ve got some really good climbers so we’ll work hard for it.”

Dougall maintained his lead in the general classification for a combined time of 7:00:09, while Drobisch moved up a notch to second overall in 7:00:58. Westvaal-BMC’s JC Nel joined them at the top of the standings in 7:01:15.

Darren Lill of Cannondale-Blend held onto the polka dot jersey while Team Abantu fast man Nolan Hoffman took the day’s two hotspots to cement his lead in the sprint classification.

In the women’s tour, Candice Neethling went on a solo breakaway after 50km to win the 88km stage from Piketberg in 2:36:13.

“In this heat, I’m glad the stage wasn’t 10km longer,” said the drained but happy Olympian.

She was followed home by VeloLife teammate Lise Olivier in 2:36:50, with An-Li Kachelhoffer of Esmero-Activate Drinks a further second off.

The final stage rolls out of Riebeek-Kasteel on Friday morning and covers a distance of 113km to the top of Franschhoek Pass. 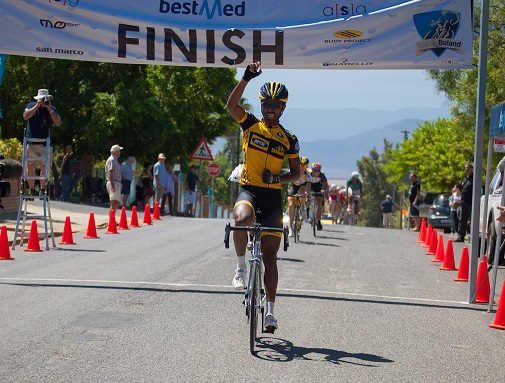 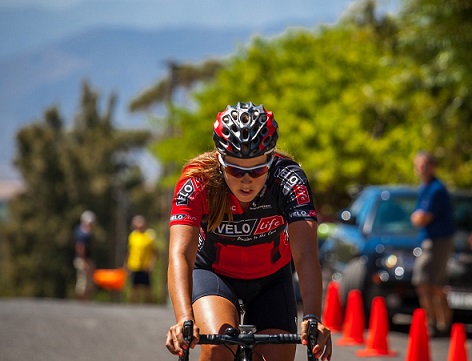 Olympian Candice Neethling (VeloLife) soloed to victory on the third stage of the Bestmed Tour de Boland, presented by ASG, in Riebeek-Kasteel on Thursday.