South Africa’s top-flight track and field stars are set to descend on Port Elizabeth for the first instalment of the annual FNB Varsity Athletics series, which gets underway at the NMMU Stadium on March 21.

The high-profile event will see athletes from the top eight universities competing for glory in the opening round of the four-meet national series.

“We’ve got an action-packed two-hour programme lined up, with the cream of South Africa’s athletes competing,” said Bothma.

“We’ve worked very hard to attract top-class student athletes to NMMU so we will give the other universities a good run for their money this year.”

Bothma said this would be the first time that the local institution played host to the event, after finishing sixth in the inaugural series in 2013.

This year’s participating institutions had qualified at last year’s University Sport South Africa tournament, he said. “The top eight universities in that competition go through to the Varsity Athletics series.”

Bothma said each squad comprised 27 athletes competing in an abbreviated programme of events.

Heading up the Madibaz charge will be defending shot-put champion and discus specialist Ischke Senekal. “She broke the Eastern Province record at her last league meeting, so she’s in top form.”

He said high-jumper Garth Ellis would be another promising athlete to watch. “Garth jumped a personal best of 2.1m recently, so we’re hoping he can clear 2.15 during the competition.”

In keeping with the high performance nature of the series, Bothma said organisers had also replaced the 1 500m race with the traditional mile distance. “We’re hoping someone will run a sub-four-minute time right here on our track.”

He said those athletes who broke a national record would receive an additional R10 000 for their efforts. “It’s certainly an incentive to perform.”

With just eight athletes taking part in each of the items, Bothma said there would be no room for mediocre performances. “You have to attain a certain international standard – whether you’re running, throwing or jumping – to have a valid attempt.”

He said athletes would be awarded nine points for a win, with last place receiving just one point. “If your attempt doesn’t score 650 points on the IAAF table, you get zero.”

Bothma said each of the four competitions would have a winning university, with an overall winner declared at the end of the series.

“Varsity Athletics provides a great national platform for our top young athletes to gain exposure, which helps to attract sponsorship and grow public interest in the sport.”

Although the competition helped fast-track athletes into professional sporting careers, Bothma said all competitors still needed to be bona fide students not older than 25 years.

The PE meeting kicks off at 5.30pm with the relay races for the top U19 school teams in the Eastern Cape. The main events start shortly thereafter and finish at 8pm.

“Schools, residences and qualifying organisations can also raise money for their sports programmes by encouraging people to attend,” said Bothma. “They will receive a R10 donation for every person that presents a special bar-coded ticket at the gate.

“We expect a full stadium and would love to see 10 000 people shouting for our athletes here in Port Elizabeth.”

To register for the fundraising opportunity, contact Jono Rumbelow on 082 761 3119 or jono.rumbelow@gmail.com.

The public can get free advance tickets by finding Varsity Sports on Facebook or registering at www.varsitysportssa.com. Tickets at the gate will cost R20. 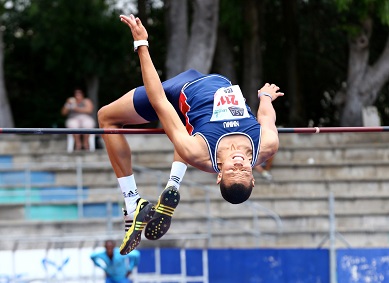 High-jumper Garth Ellis is one of athletes who will be leading the Madibaz charge during the first round of the FNB Varsity Athletics series at the NMMU Stadium in Port Elizabeth on March 21.