Non-profit community organisations will have an opportunity to raise funds for their institution simply by attending the action-packed Varsity Athletics meeting at the NMMU Stadium in Port Elizabeth on March 21.

Madibaz athletics manager Nellis Bothma said schools, clubs, churches and charities would receive a R10 contribution for every spectator who attended the first instalment of the national four-meet series on their behalf.

“It’s a fantastic initiative that allows the community to see some of the country’s most exciting athletes in action, while giving their own sports development funds a welcome boost.”

The two-hour event – which showcases the best student athletes from the top eight universities in South Africa – starts at 5.30pm and will be televised live on SuperSport.

“All their spectators have to do is fill in their name, cellphone number and e-mail address on the back of the ticket to gain entry into the stadium.

“For every person who presents one of these tickets at the gate before 6.30pm, Varsity Athletics will make the promised contribution to the relevant group’s development fund.”

He said organisers were expecting a capacity crowd at the 10 000-seater stadium on the South Campus in Summerstrand.

Olympic pole-vaulter Okkert Brits will be the official flag bearer, while local entertainer Donna Africa will deliver her rendition of the national anthem.

“This is the first time that NMMU is hosting a Varsity Athletics event, so we really want to make a splash.”

The remaining track and field meets will take place at North-West University in Potchefstroom (April 14), Stellenbosch University (April 21) and the University of Pretoria (April 28).

Bothma said free advance tickets would also be available to individual members of the public via the Varsity Sports Facebook page and website.

“All you have to do is click on the icon and register by answering a short questionnaire.”

Once the process was successfully completed, the e-ticket would be sent to the user’s e-mail address, he said.

“Then you either print it out or show it on your smartphone at the gate.”

While registered users were entitled to two free tickets, Bothma said additional tickets could be purchased via EFT or credit card at a cost of R10 each.

“If you arrive on the night and don’t want to use any of the available online technologies, you can also buy a ticket for R20 at the booth outside the stadium.”

Public: Find Varsity Sports on Facebook or register at www.varsitysportssa.com. 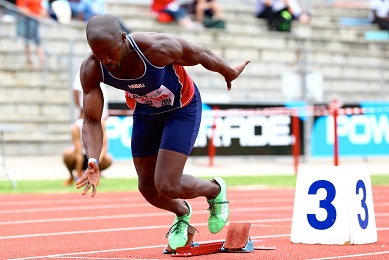 The first instalment of the national Varsity Athletics series will provide explosive action and a fundraising opportunity for community organisations when it gets underway at the NMMU Stadium in Port Elizabeth on March 21.