FNB NMMU will be looking to secure their semifinal berth in the FNB Varsity Cup rugby tournament when they take to the field against the FNB Shimlas in Bloemfontein on Monday night.

With four wins and two losses under their belts, the Madibaz will aim to finish the round-robin part of the competition on a high note.

“For us this is where our knockout stages begin and our performance needs to be of the highest quality for us to progress,” said head coach David Maidza.

“Our approach will not differ from when we started the competition.”

Maidza said team management had made just three changes to the side that claimed a rain-soaked 19-9 win over defending champions FNB Tuks in Pretoria this week.

“Monday night’s performance and result was a step in the right direction and I’m pleased with the fight the players showed against Tuks.

“The boys have certainly been buoyed by the result but they’re also fully aware of what has happened earlier in the competition when we did not focus for the next game.”

He said ever-dependable eighthman Timothy Agaba would rejoin the starting line-up with Marcel Groenewald moving back into familiar territory on the right flank.

“Louis Fourie shifts onto the bench to cover the locks, while Stefan Willemse puts on the number four jersey.”

Maidza said his Port Elizabeth-based outfit was well aware of the quality and depth in the Free State side, which featured players such as Lions lock Franco van der Merwe and Griquas fullback Gouws Prinsloo.

“We will respect Shimlas but will ensure that we are clinical in what we do on the field and that we control as much of the game as possible – with ball in hand or without.”

The Madibaz were eliminated in last year’s play-offs with a one-point loss to FNB Maties.

“We are excited to know that we have the backing of the university and thank everyone who is behind the team throughout this beautiful city of ours,” said Maidza. 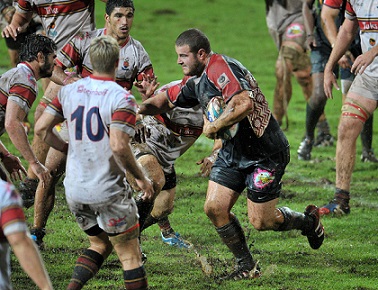 FNB NMMU captain Roy Godfrey reacts after scoring a try against FNB Tuks on Monday night. The Madibaz take on Shimlas in their final round-robin match in Bloemfontein on Monday.