Defending champion Nic Dougall stayed the course up the winding Franschhoek Pass to finish among the leaders and seal his second straight victory in the four-day Bestmed Tour de Boland, presented by ASG, on Friday.

Dougall took the yellow jersey for the MTN-Qhubeka feeder team in the individual time-trial to the top of Helshoogte on day one and did not relinquish it again throughout the three remaining road stages.

Woolcock’s teammate Darren Lill and Kevin Evans (FedGroup-Itec) split the peloton to pieces when they launched an attack at the base of the 7km climb to the mountain-top finish.

Lill then shook Evans to take a spectacular win in 2:52:30 on the 113km stage from Riebeek-Kasteel.

Lill – who also claimed the king of the mountains jersey – said it had been a good, challenging tour for his team.

“Unfortunately I missed the move yesterday so we couldn’t take the overall, but I don’t think we can be unhappy with two out of four stage wins and a second place in the time-trial.”

Dougall said the opening stage, in which he established a 39-second lead, had suited his strengths and that his team had protected him and helped extend his advantage on the hillier road stages.

“I started today’s climb on third wheel and that was all thanks to my team who kept me out of trouble for the preceding 20km.

“We always knew Darren would be so strong. He’s an incredible rider, so we were lucky we didn’t have to chase him.”

Women’s leader Juanita Venter (Bestmed-ASG) was dropped on the climb, which ultimately led to her losing the yellow jersey and a podium spot after an impressive three days.

Swiss dark horse Ariane Kleinhans (RE:CM) initiated a series of attacks at the bottom of the pass to finish second on the day and steal a surprise three-second overall victory in 9:42:01.

She crossed the line in 3:19:58, a mere 18 seconds behind stage winner and overall runner-up Lise Olivier (VeloLife).

Mountain biker Kleinhans, who won the Cape Argus Pick n Pay Momentum mountain bike challenge recently, said she had found it much more difficult to get away on the road.

“I knew I had to attack early to make as much time on Juanita as possible.

“I attacked in Franschhoek but then Lisa responded; she’s got that kick that I just couldn’t match. So I just gave it my absolute all to get up the climb.”

She said her victory had come as somewhat of a surprise, considering that she had not taken any outright stage wins.

“That’s probably what a mountain biker’s got, a little bit of consistency, so I just kept on going.” 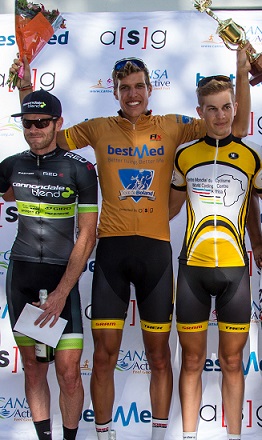