NMMU student Jonguxolo Mani has his sights set on walking off with the gold medal in the mile event at the Varsity Athletics meeting in Port Elizabeth on Friday night.

Mani will be aiming to set his home track on the South Campus alight in the opening item of the two-hour televised track and field programme.

The 10 000m walk specialist said he was looking forward to competing in the shorter distance, which is a new addition to the Varsity Athletics line-up this year.

“It uses speed, which is what I’m good at, and the pace is a lot quicker than my usual distance.”

Mani said his objective for the four-meet national series would be the top spot on the overall podium.

“I’m aiming high but if I don’t get gold, then at least a top-three position.”

The KwaNobuhle resident is currently ranked fourth in South Africa after clocking a personal best of 54:36 in his specialist distance at the national championships in Cape Town last year.

The 20-year-old made a promising start to the new season when he claimed victory in the 5 000m at the opening meet of the EPA Track and Field League in February.

Mani achieved a season’s best of 27:32:97 but said his goal was still to set a sub-25-minute time and earn a spot in the national team.

“I was well prepared as I was opening my season. Competing alone against the electronic timer was very challenging.”

The Madibaz athlete said he was still recovering from a hip injury, which he sustained during training.

“But I’m definitely getting there,” he said.

Mani said his role model was Wayne Snyman, who is due to represent South Africa at the IAAF Race Walk World Cup in China in May.

As for his own ambitions, the first-year inventory and stores management student said he still hoped to compete in the Olympics one day.

The made-for-television format of the Varsity Athletics series could provide the national platform Mani needs to achieve his aims.

NWU-Pukke will host the second leg of the series on April 14, while Maties and Tuks take their turn on April 21 and 28 respectively.

Free tickets for the PE event are available via the Varsity Sports Facebook page and at www.varsitysportssa.com. Tickets will also be available at the gate at a cost of R20. 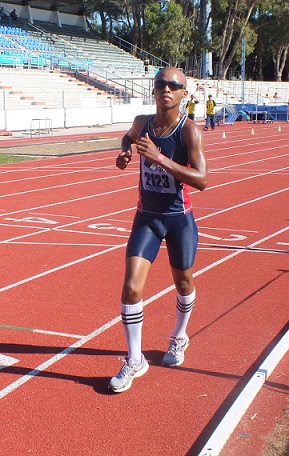 Race walker Jonguxolo Mani aims to walk away with gold for Madibaz when he competes in the opening leg of the national Varsity Athletics series at the NMMU Stadium in Port Elizabeth on Friday night.