Madibaz head coach David Maidza said his players had all been declared fit and were raring to go after a bruising 33-34 loss to FNB Shimlas in Bloemfontein this week.

Playing to the final whistle, the Madibaz scored a last-gasp converted try to earn the bonus points that catapulted them into the play-offs.

Maidza said his men had shown good character throughout the tournament and were ready to tackle the next challenge.

The Port Elizabeth side will face their toughest test yet as they look to remedy their 16-52 fourth-round loss to the team from North-West Province.

“We have a huge task ahead, playing an in-form Pukke team at their home ground,” said a circumspect Maidza.

“We are very aware of the round-robin result, where we were completely outclassed, but this is a whole new game.

“Our homework is done and it is now time to go out and execute as perfectly as possible our game plan as one unit.”

The Madibaz have marched an often rocky road to the elimination rounds, notching up four wins and three losses en route.

Maidza said what lay behind them was now less important than what lay before them.

“I’ve told the players to go out and play to the best of their ability and not worry at what stage of the competition we are at.

“We are very excited about the challenge and prospects that lie ahead.”

Captain Roy Godfrey will lead from the front once again as he takes his troops into their second semifinal in as many seasons. Madibaz lost to Maties in the penultimate round last year.

The burly prop has had an outstanding tournament thus far and was nominated as part of the Varsity Cup “best 15” team this week.

Fellow “dream team” member Daniel Acker will play a key role at scrumhalf, while flyhalf Gavin Hauptfleisch will be looking to put points on the board with his golden boot.

“The boys have done well to get to this stage but we know we were here last year and did not progress,” said Maidza.

“We need to make sure that we have to put everything into this game to progress to the final.” 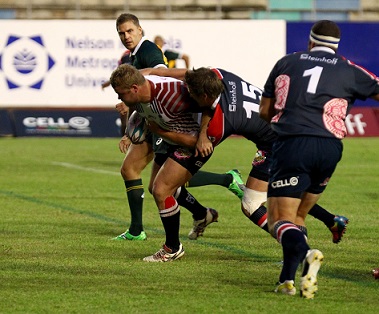 The Madibaz will look to avenge their round-robin loss to NWU-Pukke in the FNB Varsity Cup semifinal clash in Potchefstroom on Monday, March 24.