FNB NMMU ended their FNB Varsity Cup round-robin campaign in dramatic fashion when their one-point loss to the FNB Shimlas turned into a “win” as they secured a semifinal spot on Monday night.

A bonus-point try in the dying moments of the game, plus an additional point for the narrow (33-34) margin of defeat, saw the Madibaz leapfrog the team from Bloemfontein in the overall standings.

A single point was ironically the Port Elizabeth-based team’s undoing last year, when they were eliminated in the play-offs by FNB Maties.

Madibaz head coach David Maidza commended his men for their gritty display in “clawing their way back” into the Shimlas match, which he described as a good advert for Varsity Cup rugby.

“It was a tight game and in the bigger picture that’s how we went through. Having said that, I wasn’t pleased that our ill discipline could have cost us our qualification.”

The Madibaz picked up two yellow cards in a hard-fought, closely contested match that saw them whittled down to 13 men at one stage.

“The game is normally lost by the team that makes the most mistakes and we allowed Shimlas to get back into the game and score points from some of our errors.”

Maidza said they would not get away with a similar performance in the semis.

“We need to be better than that.”

The Madibaz suffered their biggest loss of the tournament (16-52) at the hands of Pukke.

“Having lost to them pretty badly in the fourth round, we know exactly where their strength lies. But it’s a new game altogether and that’s how we’re going to treat it.”

He said any home ground advantage to their opponents would be negligible.

“At the knockout stage, it doesn’t really count. We’ve actually been pretty good away from home and we’re looking forward to the game.”

Maidza said his men knew they would have their work cut out for them however.

“We’ve worked hard to get where we are and cannot just go through the motions now.

“We need to go out and put all facets of our game into top gear because we know that we’re meeting top quality opposition.”

Pukke lost just one of their seven round-robin encounters, while the Madibaz have had mixed fortunes with four wins and three defeats.

“We haven’t fired on all cylinders in every single game and have had a bit of a stop-start campaign,” conceded Maidza.

“But when we’re playing well, we’ve shown that we’re definitely a force to be reckoned with.”

He said his men fully deserved to “enjoy this moment” after a tough tournament.

“It’s critical for this game, and going forward beyond this campaign, that we really get our structures right and perform well.”

Maidza said their on-field example would be crucial to the continued success of the club.

“It’s important for all the players who come into the side in the future to understand the culture, the ethos and everything that the Madibaz stand for.”

The game will be televised live on SuperSport from 7pm. 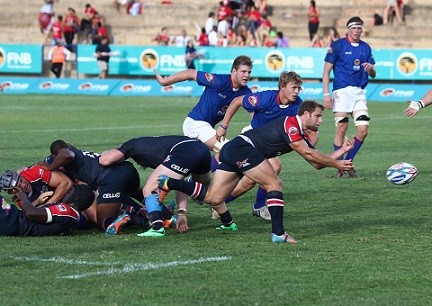 The Madibaz secured their FNB Varsity Cup semifinal slot with a nailbiting one-point loss to the Shimlas in Bloemfontein this week. They will face log leaders NWU-Pukke in Potchefstroom on Monday night.