Mountain bikers who sign up on April 1 for this year’s FedGroup Berg & Bush can look forward to some radical route changes, organisers have announced.

The eighth edition of the popular stage race takes place near Winterton in the Central Drakensberg in October.

Race director Gary Green said the three-day Descent and Great Trek routes would feature brand-new trails coming down off the escarpment into the Tugela Valley bushveld around Spioenkop.

“New farms with great new single-track have been discovered and we’re also looking at innovative ways to cross Spioenkop Dam.

“Our tunnel of floating JoJo tanks that we used to cross the Tugela River washed away in the recent floods, so we’re also investigating new possibilities there.”

Green said would-be participants could enter either the three-day races or the original two-day event.

“A few riders enter all three and stay for 11 days as they think the riding is that good!”

He said the field had been marginally increased to allow cyclists on the waiting list a chance to enter.

“The event is mainly for two-man teams but we do allow solo entries in the Great Trek.”

Green said those riders who took part last year would be guaranteed an entry if they entered and paid in full by April 4.

“We really do value their support.”

Once the events were fully subscribed, he said additional entrants would be placed on a waiting list and notified via e-mail should spaces become available due to cancellations.

While anyone could enter any of the three events, Green said the Descent would be the official prize money race for the men’s and mixed teams.

“This year, prize money in the women’s racing category will be awarded only in the Great Trek, while only medals will be given to the first five ladies’ teams in the Descent.

“We believe that this option suits the ladies as the Great Trek field is smaller, you get your own tent, great food and roving mechanics to help with mechanicals along the way.”

The three-day races start on Summersly Farm near Harrismith in the Free State and finish each day at Emseni Camp in the shadow of Spioenkop.

The FedGroup Berg & Bush kicks off with the Descent on October 10, followed by the Great Trek from October 14 and wraps up with the two-day race on October 18.

Enter online from 10am on April 1 at www.bergandbush.co.za. 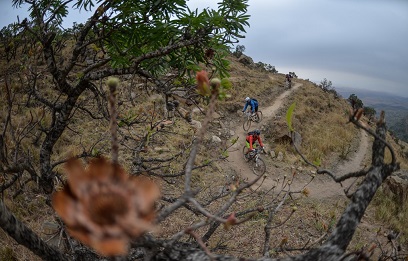 Entries for the ninth edition of the FedGroup Berg & Bush, which takes place in the Central Drakensberg in October, open on April 1.