FNB NMMU came within striking distance of their FNB Varsity Cup dream as they went down fighting in their semifinal clash against FNB NWU-Pukke in Potchefstroom on Monday night.

In what appeared to be a replay of last year’s play-off game against Maties, a one-point difference was once again the source of their demise.

“We didn’t want it to end this way,” said head coach David Maidza.

We knew our qualities, we knew we were good. We had the squad to get to the final and win it.”

Pukke came out all guns blazing to take a 13-point lead after the first quarter but the Madibaz fired back to set up a ding-dong battle for the rest of the game.

“It was a blow for the boys, especially considering how they played. On the day we were a better team than Pukke but that’s how the ball rolls,” said Maidza.

“We just couldn’t hold on to that one-point lead with 10 minutes to go and we couldn’t make their mistake late in the game count for us.”

The Port Elizabeth side went through ups and downs over the course of the eight-week competition, said Maidza.

“We started well against Maties and UJ and I felt we could have sustained that momentum.

“But then we came unstuck against a plucky Ikeys side and that jolted our confidence a bit. In the next round, we were absolutely outclassed by Pukke.”

The Madibaz bounced back from those two losses on home turf to beat both Wits and defending champions Tuks.

They lost by one point to Shimlas in the final round-robin game but had done enough by then to get through to the elimination round.

“What happens in any competition – especially one that’s week in, week out – is that you cannot have a stop-start campaign. You’ve got to be on top of your game every week to get your confidence up,” said Maidza.

“Having said that, for the boys to dig deep in three games away from home and get the required result showed the tremendous character and maturity that the team gained along the way.”

Maidza said captain Roy Godfrey and the senior players in the team had been particularly disappointed as they had hoped to leave a winning legacy in their final Varsity Cup tournament.

“For me, they have left a legacy – we’ve proved that we’re a good side and they’ve been excellent ambassadors for Madibaz rugby.”

He said loosehead prop Godfrey, hooker Martin Ferreira, tighthead prop Dexter Fahey and eighth man Timothy Agaba would be among those moving on.

“I’d really like to thank them for all their hard work. It has been much appreciated.”

“He put together a very decent side that competed well.

“It’s not just the 23 who were there, it’s the whole 36-man squad – everyone has played a part. Hopefully we can learn from this for next season and go further.”

Maidza said a few of his players had been approached by provincial teams but that any announcement to that effect would be made in due course.

“What the boys have done on the pitch is advertise themselves well. Whichever players I’m going to lose to the Vodacom or Currie Cup sides, I’m sure they’ll acquit themselves well in any of the provincial set-ups.”

He said the Madibaz would now turn their attentions to the local club season and defending their title in the Eastern Province Grand Challenge.

“We’ll use the USSA week in June and the club season to groom the players and sound the depth of talent at the university.

“But we can’t be looking forward to next year without the students putting in good academic work. That’s something I’m going to be pushing hard with each of them.”

Maidza said Varsity Cup’s balanced approach to sport and studies would be critical to their future success.

“What a great opportunity these youngsters have to be studying, while playing rugby at this level.” 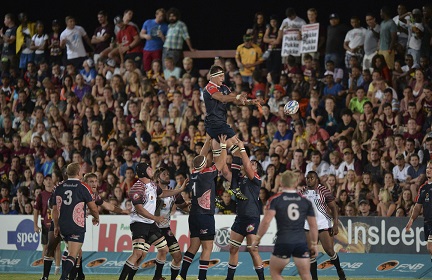 The Madibaz hoist lock Cameron Lindsay high into the air during a line-out in their semifinal game against NWU-Pukke in Potchefstroom on Monday night. Photo: Catherine Kotze/SASPA