Children at four rural schools in the Central Drakensberg will be given a chance to discover the world of books when the FedGroup Berg & Bush embarks on its library project on April 1.

According to organiser Gary Green, the eighth edition of the KwaZulu-Natal mountain bike stage race – which takes place in October – would provide a journey of discovery for both participants and beneficiaries.

Green said the event – which starts near Harrismith in the Free State before dropping off the escarpment into KZN – aimed to hand over basic library furniture and new books to four junior farm schools situated near the Emseni Camp race village just outside Winterton.

“The book hand-outs will be managed by local farmers’ wives, most of whom are former teachers. If the venture is successful this year, we’ll expand to the senior school in the township where the need is also great.”

He said the beneficiary schools would be Schietsdrift Primary near Winterton, Middledale and Ekhukhanyeni schools in the vicinity of Ladysmith and Ekajesu Crèche adjacent to Spioenkop Nature Reserve.

Some 500 learners between the ages of three and 13 will benefit from the project.

Green said the idea for the initiative first arose when his son Wesley lent a local matric pupil a copy of Ian Player’s Zululand Wilderness, as he was desperate to improve his English.

“Wes found out that the boy’s teacher subsequently used the book as a class reader as there were no books at all in the school.”

Horrified at the situation, Green contacted Lynette Heron who had started a library initiative at Schietsdrift.

“Lynette, an ex-teacher, organises students from overseas to help teach and do volunteer work. They have converted an old room, redone the floor, put in some shelves and started a small library.

“The school has been taught a filing system but now needs carpets and suitable reading books.”

He said many of the children’s parents worked on the mountain bike event as route builders and marshals; therefore it was important to give back to the community wherever possible.

“It’s imperative as these people are lacking in basic facilities such as running water, transport, electricity and a good education.

“These things we take for granted but for many locals it just doesn’t exist.”

In previous years, the race has been able to donate solar panels and rainwater tanks to local communities, as well as repair 5km of game fence along the boundary of Spioenkop Nature Reserve.

Last year, sponsor JoJo Tanks matched riders’ donations and the funds were used to purchase 25 tanks and gutters for households along the route.

Green said riders in the 2014 event would have the option to donate to the library cause when they entered on the official website.

“Members of the public are also welcome to contact us to get involved.” 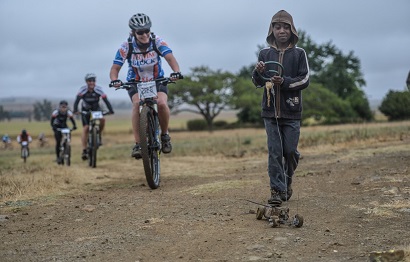 Rural schoolchildren will discover the joy of reading when entries for the FedGroup Berg & Bush mountain bike race open on April 1. The KwaZulu-Natal event, which takes place in October, aims to raise funds for establishing libraries at four farm schools. Photo: Kelvin Trautman