Mountain bikers who miss their chance to enter one of KwaZulu-Natal’s premier stage races will be left feeling rather foolish when online entries open on April 1.

Organisers of the FedGroup Berg & Bush are once again expecting a steady stream of entries for the eighth edition of the event, which is fully subscribed year after year.

According to race director Gary Green, all systems were in place and his team were bracing themselves for the influx of entries.

“Unlike previous years, we have decided to open to all on April 1 to give everyone an equal chance of entering.”

Green said finishers from the 2013 event would however be guaranteed a spot, provided they had entered and paid in full before noon on Friday.

He said those would-be participants who did not manage to secure an entry on the day should keep trying.

“It can also take up to three days for an electronic funds transfer to clear, so successful entrants will receive a confirmation of entry once this happens.”

After the entry list was consolidated, he said any available spots would be opened up to hopefuls on the waiting list.

“They’ll be contacted via e-mail to let them know that there is space available.”

The event, which takes place near Winterton in the Central Drakensberg, comprises three different riding options: the Descent (October 10 to 12), Great Trek (October 14 to 16) and original two-day race (October 18 and 19).

The three-day routes start near Sterkfontein Dam in the Free State and feature a spectacular drop off the escarpment into KZN, while the two-day event is more suited to first-time stage racers and crosses the picturesque Spioenkop Dam and Game Reserve.

Green said the overall field had been slightly increased to allow cyclists on the waiting list to enter, but that entries for the Great Trek would still be capped at 300 teams.

“While the Descent is our most popular and trademark event, the Great Trek boasts a solo entry option and is the ladies’ prize money race. It also offers a smaller field and little luxuries like individual tents.”

Enter online from 10am on April 1 at www.bergandbush.co.za. 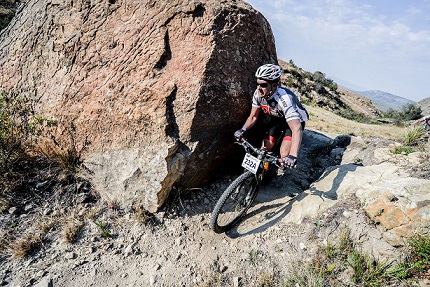 Organisers announced that entries for the eighth FedGroup Berg & Bush will open at 10am on Tuesday, April 1. Photo: Kelvin Trautman