Cannondale-Blend’s Waylon Woolcock timed his break to perfection to snatch a surprise solo victory on day two of the Bestmed Tour de Boland in the Cape Winelands on Wednesday.

The former Tour of Egypt winner broke away in the closing kilometres of the 129km road stage from Solms-Delta Wine Estate near Franschhoek to cross the finish line at the Tulbagh Hotel in 3:14:39.

Overnight leader Nic Dougall finished safely in the bunch to retain the yellow jersey for the MTN-Qhubeka feeder team.

The day’s racing started cautiously in hot conditions, with the top teams unwilling to commit to an early breakaway.

The first sprint prime of the day was won by Peter Lee Jeffries of Inter-active-Tech, while Woolcock’s teammate Darren Lill took the initial king of the mountains hotspot near the Taal Monument at Paarl.

Former Franschhoek resident Nolan Hoffman of Team Abantu went on to claim the second sprint prime at the 37km mark near Windmeul Kelder.

Just a few kilometres on, the racing started in earnest as the bunch split in two and the leaders opened a one-minute gap on the large chase group.

ASG’s Chris Jooste made a daring getaway from the front group after 50km to go 15 seconds clear as the remaining leaders were hauled in by the main chase group.

With 40km to go, Tanzanian Richard Laizer caught Jooste and the two worked together to extend their lead to just under three minutes.

MTN-Qhubeka’s Laizer claimed the final king of the mountains hotspot on Bothmaskloof Pass before he and Jooste were finally reeled in by the bunch.

Another three-man break – featuring Kevin Evans (FedGroup-Itec), JC Nel (Westvaal-BMC) and Jeffries – was brought back in the final 20km.

“We knew from about 25km out that the gutter winds would be the instigating factor in splitting the peloton,” said Woolcock.

“The bunch split up quite nicely to about 20 riders and from then on the guys were trying to attack.”

He said MTN-Qhubeka had been made to work hard by the peloton after Dougall had opened a 39-second lead in the time-trial on day one.

“We tried to put them under pressure by having guys go up the road and forcing them to chase and control the race.”

Bonitas’s Dylan Girdlestone put in a few good attacks but his moves proved to be premature.

“In the second last corner, my teammate Darren put in quite a big effort that put the yellow jersey under pressure,” said Woolcock.

He said he waited for Dougall to give chase and then went with him.

“Once he got across with me on his wheel, I countered that move. I obviously nailed him at just the right time and managed to stay away and win the stage for my new team.”

In the women’s race, An-Li Kachelhoffer (Esmero-Activate Drinks) outsprinted her nearest rivals to claim the 120km stage in 3:17:04.

She was followed home by Lise Olivier (VeloLife-BMC) and Ariane Kleinhans (RE:CM).

Overall leader Juanita Venter (Bestmed-ASG) said her team’s objective had been to stay in yellow and not lose any time, which they executed perfectly.

“We’re not riding for the hotspots; we’re just trying to keep the lead.”

On Thursday, the riders depart from Tulbagh and cover a challenging 138km route to Riebeek-Kasteel, via Porterville and Piketberg. 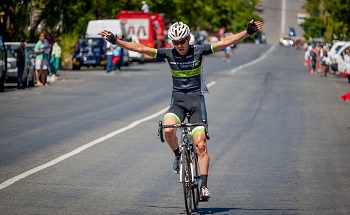 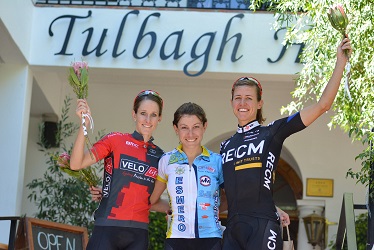 Lise Olivier (VeloLife-BMC), An-Li Kachelhoffer (Esmero-Activate Drinks) and Ariane Kleinhans (RE:CM) on the podium after stage two of the Bestmed Tour de Boland, presented by ASG, in Tulbagh on Wednesday.